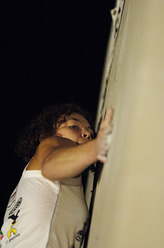 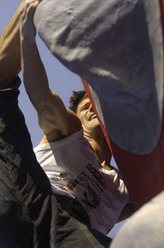 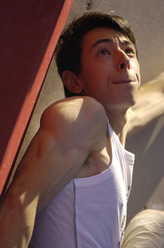 On 31/03/2007 the Ukrainians Mykhaylo Shalagin and Olga Shalagina won the first stage of the IFSC World Cup Boulder at Erlangen, Germany.

The seven-staged Bouldering World Cup 2007 kicked off in Germany's Erlangen last weekend and was dominated by the Ukraine. Relative newcomer Mykhaylo Shalagin surprised all to win the men's event, while reigning World Champion Olga Shalagina confirmed expectations to win the women's comp.

Once again the signals from the world bouldering circuit confirm just how indecipherable, difficult and uncertain this short and intense discipline is, above all in the men's event. The 25 year old Ukrainian was followed into second place by one of the world finest, Kilian Fischhuber from Austria, while third place went to 20 year old Jonas Baumann who, in doing so, produced his most important international climb to date. Shalagina beat the recently crowned European Champion Juliette Danion from France and ChloÃ© Graftiaux from Belgium who, once again, proved just how versatile she can be.

The Qualification numbers in the Men's event say it all: Stephane Julien from France led the provisional field (all 6 boulders sent first go!) ahead of Gareth Parry from Britain and Nalle Hukkataival from Finland (both sent all 6 boulders but needed more attempts to do so). Pouvreau (Fra), Verhoeven (Ned), MÃ¼ller (Sui), Fischhuber (Aut) and Ennemoser (Aut) all sent 5 problems.

Hukkataival took the lead in the Semifinal, sending 3 out of 4, ahead of Kilian Fischhuber, Matthias MÃ¼ller and Mykhaylo Shalagin (all with 2 tops in 2,3 and 5 attempts respectively). Gareth Parry and Jonas Baumann qualified for the final too, both with 1 top first go. In the Final Shalagin startled all and send the 4 problems in just 5 attempts. Fischhuber needed 4 gos for his 3 tops, while Baumann needed 5. Hukkataival placed 4th, Parry 5th and MÃ¼ller 6th.

The women's competition was marked by Olga Shalagina fightback to victory, from provisional 7th in the Qualification to 5th in the Semiginal, and then victory with 4 problems sent in 6 attempts. Shalagina's epic battle repressed Juliette Danion who had led the competition from the outset, sending all problems straight off in both the Qualification and the Semifinal. But in the last round the reigning European Champion needed 11 attempts to send the final four problems and so, right at the end, she found herself slip into second place.