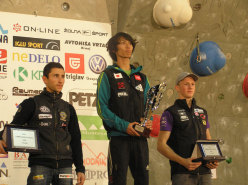 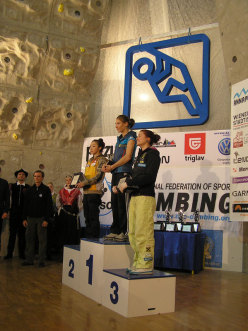 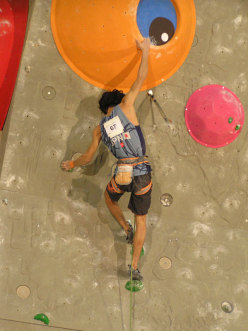 Sachi Amma, winner of the Lead World Cup 2012 competing at the final in Kranj
Photo by Franz Schiassi 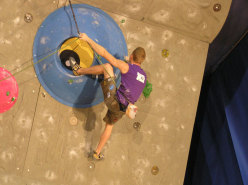 The final stage of the Lead World Cup 2012 went down to the wire on Sunday 18 November in Kranj, Slovenia. After Saturday's Semifinal, the 2012 Lead World Cup title was still up for grabs and only a win - in both the male and female category - would ensure overall victory.

The male athletes competed first, up an 8b+/8c route which involved a long series of intense power moves. While all eyes were on Sachi Amma and Ramon Julian Puigblanque, it was Austrian Jakob Schubert (third from last to compete) who captured the spectators' attention with an unstoppable climb which propelled him to a few holds from the top, worthy of his World Championship victory this year. Despite his initial indecision Sachi Amma managed to equal the highpoint reached by Norway's Magnus Midtbø and then grab the next hold before his inexorable fall which placed him provisional second.

Conscious of what was at stake, last to climb Ramon Julian Puigblanque checked out the route extremely carefully before setting off. After having resolved the long reach with a spectacular dyno to hold 16 (which had got the better of Korea's Hyunbin Min), Puigblanque continued upwards only to down-climb back again, undecided. And just like in Paris this year, this indecisiveness and perhaps his nervousness revealed to be fatal for the Catalan champion and he soon fell, handing the title to Sachi Amma who thereby won his first ever Lead World Cup.

We managed to exchange a few words with Norwegian Magnus Midtbø during the various prize ceremonies.

Magnus, what do you think of the route, was it quite hard? Nobody topped out...

Yeah, it was really bouldery. I think it's a lot more fun to climb a bouldery route in the finals, you can't spare any effort and I think it's more fun for the spectators as well.
Are you satisfied with your performance? Do you think you could have climbed a bit further?
In retrospect, I could have done better, but it's always like that, you know. I stopped for a while on the green hold, I should have just taken it and campused to the next move immediately. You could always do a little better but you could also do a whole lot worse.

What about next year? Are you looking forward to it?
Yes, right know I'm really psyched. I was really strong at the start of the season, then it kind of went a little down before Paris and now it's getting better again and I just wish there were another couple of competitions... But hopefully I’ll get to use this good shape on rock instead.
When are you going to start to train again for 2013?
Probably not until end of April or early May.
What do you make or Ramon's mistake? What do you think happened there?
I think he was really nervous because he knew there was a lot at stake. It was a little bit like the World Championships, when he got into trouble. To me it's a bit strange that he didn't make the best of that previous experience, he did the same thing in Paris, he went up and down. Especially when the route is this hard, you can't afford to make any mistakes, you just have to go for it.
I guess you can't play it safe, you have to take some risks...
Yeah, exactly.

In the women's competition various athletes fell off the 28th hold, exiting the roof which required fresh forearms and a foothold on the left which wasn't that obvious. Maja Vidmar, celebrating her tenth competition season, sent this section with ease and got to the difficult reach towards a sloper. Young Momoka Oda from Japan reached this same hold as did Mina Markovic, third from last to climb and provisional first thanks to her earlier Semifinal result. Dinara Fakhritdinova was one of the only athletes to top out in the Semifinal yet she wasted an excellent chance of her second win this season by making a mistake and falling low. Last out was Jain Kim. Climbing elegantly and in control, the Korean reached the enormous volume and the route's second crux but, just when she was a mere hold away from Mina Markovic's highpoint, she fell during a fatal reach to finish fourth, behind Mina, Momoka Oda and Maja Vidmar.

Mina sat down with us to talk as she collected her prize...
Mina, congratulations! What can you tell us about today's final route?
Today I felt really well prepared and I could feel it also on the wall. But I knew that Jain was also well prepared, so it was hard for me. Actually, I didn't really think about winning this, I just wanted to focus on my performance. I just knew that if I didn't do my best, it would be almost impossible to win because we are all in great shape. It was hard, there was a little tension. I think you could see it, also with Maja and Jain, we were not climbing relaxed, or like we usually do.
How has it been to come back not only to Europe, but also to Slovenia, your home country, after the stages in the USA and in Asia?
I really liked Asia and the whole leg of the tour that we spent there. But when I came home it was really nice to meet friends, climb in my home gym, settle down a little bit, relax and have fun training and preparing myself best.
Did you find it easier or harder, this year, to compete in the Lead World Cup being the reigning champion?
I don't know. I think that last year's victory didn't make this year easier or harder, but certainly different. This year Jain and I did all the competitions, I think I was more consistent though. She had more first places, although in one final we got to the same height but she had the best result in the semifinal, which put me in second place. It happened a couple of times this year, to tie first in the final but be second on countback. But probably the hardest thing for me was my injured thumb because I knew I was not at the level I had before, at the beginning of the season, like in Chamonix for example, or even in the middle of the year. So for me, personally, in my head it was a little harder to climb and I had to fight more in every route.
And today you really won everything: today's competition, the Lead World Cup 2012, the Combined World Cup. How does that feel?
Well, it was really a perfect ending to the season. One of these titles, the Combined was already secured before this competition, but not the Lead title or this World Cup stage. It was a hard one and I am really happy about how it has all ended.