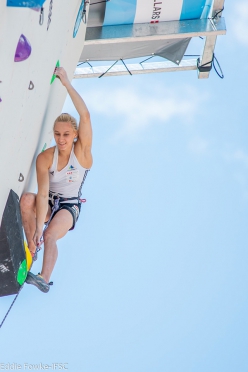 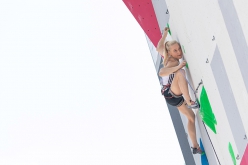 Janja Garnbret competing in the first stage of the Lead World Cup 2019 at Villars, Switzerland. Note no chalkbag
Photo by Luka Fonda

PORTFOLIO / gallery Portfolio: Janja Garnbret, the video of her chalkless climb at Villars

Janja Garnbret, the video of her chalkless climb at Villars

The video of Janja Garnbret competing in the Semifinal of the first stage of the Lead World Cup 2019 at Villars in Switzerland and climbing without a chalk bag. Her ascent is compared to that of 15-year-old Chaehyun Seo who placed second.

At Villars last Saturday during the first stage of the Lead World Cup 2019 Janja Garnbret performed another of her magic tricks, climbing the Semifinal route without ever chalking up. Inexplicably her chalk bag fell right at the start and after a moment of bewilderment the twenty-year-old Slovenian climbed right to the finishing hold. Her ascent - the only top in that round - is documented here and compared to that of Chaehyun Seo, the 15-year-old South Korean produced a devastating senior World Cup debut and finished second.