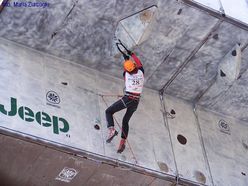 Last weekend over 60 athletes gathered in Busteni, Romania, for the second stage of the Ice Climbng World Cup 2008, won by Austrian Markus Bendler and Woon-Seon Shin from South Korea.

Woon-Seon Shin's victory in the women's event was without a doubt the biggest surprise in Romania; the young South Korean caused an upset by beating the expert Russian Natalya Kulikova and Jenny Lavarda from Italy who, last season, won practically all there was to win. Markus Bendler, battling it out on routes set by Attilio Munari and Massimo Da Pozzo, was the only athlete capable of topping out in the men's final, and he was followed in close second and third by Samuel Anthamatten from Switzerland and Evgeny Krivosheitsev from the Ukraine.
All eyes now focus on the coldest garage in the world, or rather, Saas Fee for the third and final stage of this short 2008 season. Bendler and Anthamatten share provisional first place with 180 points and no doubt they will be the ones to beat, while Swiss Petra Müller leads the women’s field, 10 points clear of closest rival Jenny Lavarda.


Will Bendler manage to improve on his second place in 2007 and win his first ever World Cup title? And will Lavarda manage to control her power and above all emotions to win her second title in a row? Or will Müller and Anthamatten make it big in front of their home crowd? We'll know more on 21 and 22 February.