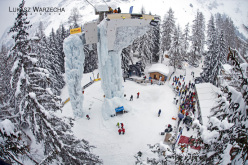 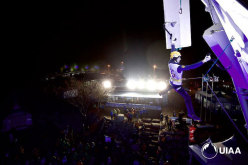 Angelika Rainer in action at Cheongsong (South Korea) during the first stage of the Ice Climbing World Cup 2013 and World Championship which she won.
Photo by UIAA 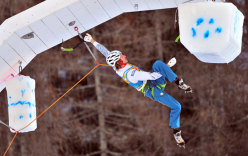 Markus Bendler, 4th at Rabenstein during the 3rd stage of the Ice Climbing World Cup 2013
Photo by UIAA 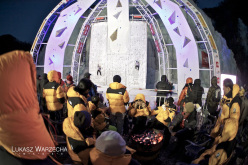 The dates and the trailer of the Ice Climbing World Cup 2014, with stages scheduled in Korea, Romania, Switzerland, France, Italy and Russia.

The calendar for the Ice Climbing World Cup 2014 has been confirmed and is official. After a "warm-up" in the USA, at Bozeman during the famous ice climbing festival that also acts as the North American Championship, the World Cup gets underway in January with the first stage at Cheongsong in Korea, followed immediately after wards by the usual stages at Busteni in Romania and Saas-Fee in Switzerland. And then, to finish off a frenetic January, with the stage at Champagny en Vanoise in France. In February the World Cup circuit travels to Italy, more precisely to Rabenstein in the Dolomites, and after the parenthesis of the Youth World championships at Champagny en Vanois, the season draws to a close with the 6th and final stage at Ufa in Russia, which also serves to assign the European title. It's worth noting that in this Olympic Winter Games year there will be no senior World Championship, and the athletes will be invited to take part in the games' festivities that take place from 7 - 23 February at Sochi in Russia.