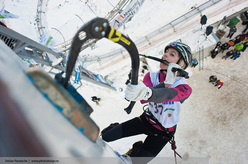 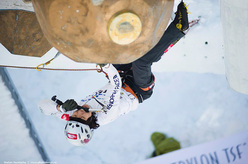 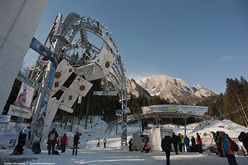 The competition wall at Busteni
Photo by Stelian Pavalache | www.photodesign.ro

The third stage of the Ice Climbing World Cup 2011 took place in Busteni, Romania on 5 and 6 February and was won by the Italian Angelika Rainer and Hee Yong Park from Korea. With this vicotry the two are also crowned World Champions, and this is Rainer's second consecutive world title.

Here we go! Angelika Rainer has finally brought home the result she hoped for by winning the third stage of the Ice Climbing World Cup 2011 which took place in Romania's Busteni last weekend. After an unfortunate start (7th in Korea due to a technical mistake and 13th in Saas Fee) the defending World Champion has finally managed to show her true worth this season. If the rumours are right and if what the UIAA press office has confirmed is true then this will be her last season before retiring from the competition circuit altogether. Should this be the case then she couldn't finish in better style - Busteni acts not only as the third stage of the World Cup but also counts as the World Championship 2011, and this recent this title now joins her 2009 World Championship win in Saas Fee.

Climbing on an impressive structure which however was pretty much devoid of real ice, the South Tyrolean qualified for the final as the only athlete to achieve two tops. On the deciding route Rainer climbed a meter higher than second-placed Wonn Sheon Shin from Korea and two meters higher than expert Anna Galyamova from Russia (winner of the second 2011 stage in Saas Fee). Rainer's team-mate Barbara Zwerger qualified for the final, toom and finished an excellent 7th, while overall 2008 winner Jenny Lavarda finished 11th out of a total of 22 athletes.

The men's competition was won by Hee Yong Park from Korea who beat, somewhat surprisingly, the super champion Markus Bendler from Austria by... just a couple of seconds. In fact, while the men to beat after the Semi-Final were Bendler and arch rival Maxim Tomilov (the only athletes with two tops), in the Final a desperate crux blocked almost all except for the Austrian and the Korean who, once past this section, cruised to the top. The two were separated not by the results of the previous rounds but by the time needed to reach the top: Park had climbed 9 seconds faster than Bendler and this secured him victory.

Worth noting is the return of brave-heart Yevgen Kryvoshytsev, the ex Ice Climbing World Champion who has now returned to haunt the competition circuit after a couple of season's leave. He placed third in Romania and also 6th in Saas Fee, proving that he may be somewhat older than before, but nevertheless a force to be reckoned with!

The speed competitions were dominated - as usual - by the Russian squad and won by Pavel Gulayev and Anna Galyamova. This domination seems total and with no respite on the near horizon: the men's final was comprised of a staggering 8 Russian athletes, while in the women's the first 5 positions all belong to this team. This is certainly a great omen for the final stage of the World Cup 2011 which will take place at the start of March in Kirov... the home of the fastest ice axes and crampons in the world.