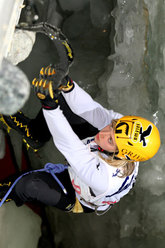 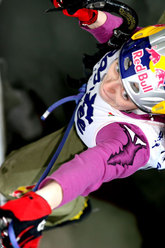 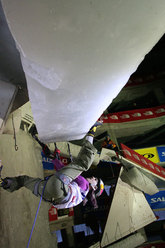 Saturday was a day to remember for the Italian ice climbing movement as Angelika Rainer won her first ever World Cup stage while teammate Jenny Lavarda placed second and, in doing so, took home her second World Cup title in a row.

Rainer won her first stage ever by climbing about a meter higher than Lavarda, who was followed closely by the Russians Ksenia Sdobnikova and Maria Tolokonina, 3rd and 4th respectively. Hot favourite Petra Müller had to make do with 5th place and this "slip-up" cost her dearly as Lavarda capitalised immediatly to win her second overall title with a score of two 2nd places (Daone and Saas Fee) and one 3rd (Busteni).

The men's podium in the world's most famous ice climbing "garage" was topped by the "crazy ice goblin" and great climber Simon Anthamatten. After placing only seventh in Busteni the Swissman set the record straight, winning in front of his home crowd to secure overall 2008 victory.

Anthamatten was followed by Evgeny Kryvosheytsev who, thanks to this second place and 3rd in Busteni, took home bronze for 2008. This unexpected 3rd overall is testament to Kryvosheytsev's gigantic capacities - in Daone he false started and placed a disappointing 14th!

2008 will be a year to remember for South Korean revelation Park Hee-Yong who placed 4th overall after 8th in Daone, 5th in Busteni and 3rd in Saas Fee. No doubt he'll return home content, unlike Austrian Markus Bendler who led the provisional ranking at the eve of the final competition after victory in Busteni and second place in Daone. But the final and decisive Swiss stage got the better of him and his 8th place handed overall gold to Simon Anthamatten.