► News ► Competitions ► From the Pierra Menta to the Grande Course... the changing face of ski mountaineering competitions 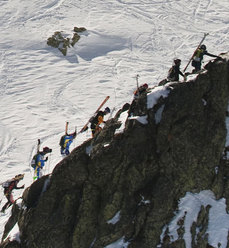 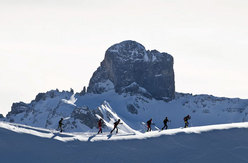 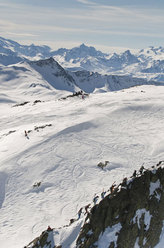 PORTFOLIO / gallery Portfolio: From the Pierra Menta to the Grande Course... the changing face of ski mountaineering competitions

From the Pierra Menta to the Grande Course... the changing face of ski mountaineering competitions

The Grande Course has just begun, the first international ski mountaineering cup comparable to a tennis Grand Slam. Action kicked off on 17 March on the slopes of France's Arêches-Beaufort, which hosted the Grenoble winter Olympics, with the classic French ski mountaineering competition Pierra Menta which dates back to 1985.

Defining the "Pierra" simply a ski mountaineering competition is an understatement. I suppose it might be defined as an "alpinism on skis competition" because it requires skills such as "cramponnage" (i.e. climbing with crampons), demands real commitment to ascend the crests, the arduous ascents up the couloirs and those steep descents. These factors, coupled with experience, count for at least at much - if not more - than the devilishly fast ascent, executed nowadays by numerous athletes who have turned to "ski alp" and its climbing skins after having excelled in sports far removed from the mountains such as cycling and running.

The alpinist must be a good racer. But being good at running and being a fairly good skier, capable of maintaining the rhythm in the parallel ski tracks certainly doesn't suffice. In many ways this is the real characteristic of the Grande Course: it requires numerous techniques, mountaineering first and foremost. It's comprised of five competitions spread out over two years, all with teams of two or three athletes. The Pierra Menta requires two, the Mezzalama three, and all require teams - or partnerships if you prefer to call them this. Which, on careful analysis, is nothing more than a traditional climbing partnership, in which reciprocal help, encouragement and safety depend on the fact that you are not alone.

Having said that, the Grande Course is also an individual championship and an overall ranking is drawn up for each single athlete. The fact that a "fast & light" alpinist such as Franco Nicolini – the man who climbed the 82 4000m peaks in the Alps (ie. all the peaks above 4000m in the Alps) in 60 days – has decided to put himself to the text is emblematic. Emblematic of a component which the white ISMF climbing skin circuit had pushed aside and which is now overbearingly returning to the forefront. As such it's worth repeating: the component mountaineering.

This concept is rendered all the more complete if you bear in mind that the races take place at altitude (except for the Pierra, all competitions are above 3000 meters, some even above 4000m), across impervious mountain terrain and in difficult atmospheric conditions. "This is why and "oldy" like me has decided to give it a go. From Pierra to Adamello and Mezzalama, the experience I have will surely count more here than in other competitions. Nevertheless you need to be fit, on top form and fast" explained Nicolini.

Although the altitude at the Pierra Menta is lower, it certainly doesn't lack rocky crests and mixed terrain which must be negotiated with skis strapped firmly to rucksacks, with crampons, harnesses and daisy chains clipped to fixed ropes. And the weather won't be docile during these days, with rain and snow adding to the difficulties, should this be needed. Stating "days" a moment ago wasn't an error, on the contrary, seeing that this transalpine competition is similar to the Tour de France, with various stages (four, from Thursday 17 to Sunday 20) and an aggregate total time. 400 ski mountaineers split into 200 teams will ascend 10,000 vertical meters in 4 days... it's going to be leg-wracking.

But with the birth of this élite championship, in which direction are ski mountaineering competitions now heading? With this Championship which, despite its "extreme" characteristics, seems to be seducing even those who habitually take part in night races, i.e. the base of the competition iceberg? At this point it's worth taking a brief look at how the entire competition unfolds: the championship combines 5 races in 3 countries and is comprised of 6 stages which take place over two years: the Pierra Menta (France, currently being held from17 – 20 March 2011), the Adamello Ski Raid (Italy, 3 April 2011), the Trofeo Mezzalama (Italy, 30 April 2011), the Pierra Menta once again (the only competition which takes place on a yearly basis, scheduled for 15 - 18 March 2012), the Tour du Rutor (Italy, 30 March – 1 April 2012) and the Patrouille des Glaciers (Switzerland, 25 - 28 April 2012).

"I'm happy that a Championship like the GC has sprung to life" underlined Matteo Eydallin, the Italian who won the 2009 Mezzalama Trophy with his Italian army teammates and who is competing here at the Pierra with "blondy" Denis Trento. "I'm happy, but I cannot help wonder how we'll be able to participate in both "circuits", this and the World Cup. It won't be easy. I'll see how things unfold at the Pierra and then decide. It depends on whether I'm on form and competitive or not. What I do at the Adamello Ski Raid depends on this".

Eyda's words – which happen to echo a widespread opinion - beg the question: if there's strength in numbers, what will a split lead to? One must bear in mind that in 2010 in Salzburg the ISMF voted against the "Big Race". The countries excluded voted against and Italy, which could have boasted three stages, abstained. It could have been the absolute non-plus-ultra of long distance competitions, or something along these lines, with the added bonus of an unprecedented media appeal and attention (incomparable to these five "queens") for this small vertical sport which is currently experiencing exponential growth. So much so that companies are beginning to notice this trend and act accordingly. But instead of capitalising on all of this, what happened was similar to the games children play, with crayfish-like steps... backwards.

If it's true that the Grand Course is a decisive leap forward – because in joining forces the best arenas and most blasoned organisers have now emulated what happens in the tennis Grand Slam – then it is just as true that the International Federation has lost out, or rather, taken an inevitable step backwards. This isn't just an opinion, but an objective analysis of the facts: without any of the five "Queens", the ISMF has lost its Roland Garroz. "I'm not sure if what is happening" concluded Eydallin "is helping us in our quest to become an Olympic sport..." One thing though must be borne in mind: if competition is the soul of commerce, and if both parties have given each other reciprocal winks, then it is still possible that the future of ski mountaineering will be even better still.

For now though lets concentrate on the Pierra Menta, and let's watch it unfold carefully because all (or almost all) the world's best are here. And also because there's plenty of fun to be had here, perhaps above all for the crowds of spectators who spur the athletes up to the highest peaks, cheering and ringing bells for absolutely everyone. From the first athlete to the last. So "bòn courage" to all! The 10,000m await...