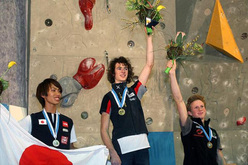 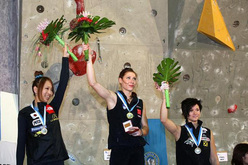 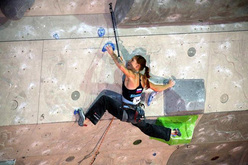 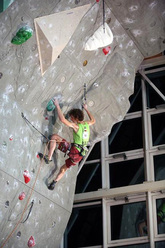 He did it! Adam Ondra managed to win the World Cup 2009 and, in his debut year in senior competitions, the 16 year old from the Czech Republic proved that even on plastic he is the new parameter against which others need to measure themselves. With a victory march which saw him win in 4 out of 6 competitions (to which one must add one 5th place and a comp to be forgotten about, since he placed 11th in front of his home crowd in Brno), Adam managed to beat the classiest of rivals, Patxi Usobiaga from Spain, the reigning World Champion and winner of the World Cup in both 2007 and 2006. Usobiaga's female counterpart, the 17 year old World Champion Johanna Ernst, experienced a different fate: she had to confirm her supremacy and she did so by brushing aside any remaining doubts: she is the supreme star. Victory for both Ondra and Ernst was by no means easy no something to be taken for granted, because the other athletes are superbly capable and in order to win even the greatest of champions needed to give it everything they had.

For example, at first glance Ondra's road to victory seems overwhelming. But in truth, as often happens, everything was still up for grabs when the best in world gathered in Slovenia for the historic final stage in Kranj, which celebrated its 14th anniversary this year. There were two pretenders to the throne, Ondra with a slight advantage despite the parenthesis of Brno, Usobiaga with the desire to show that at 29 years old he is one of the strongest athletes of all times. But there was nothing the Basque climber could do: Adam truly dominated and he was the only climber to top out in the semifinal and the one who climbed highest in the final, falling just a hair's breadth from the finishing holds. Second place went to the Asian Champion Sacchi Amma who, in doing so, clinched bronze in 2009, while after his victory in Brno the young Austrian Jakob Schubert placed thrid. Usobiaga had to make to with 6th in Kranj, behind Mikhail Chernikov from Russia (4th) and home athlete Klemen Becan (5th), but ahead of Frenchman Gauthier Supper and Magnus Midtboe from Norway - with this result (the worst this year) all Usobiaga's hopes for his third title vanished.

In truth what Adam managed to do this year in the men's event is an exact photocopy of last year's women's event, when the (at the time) 16 year old Johanna Ernst managed to win the World Cup in her debut year, too. She dominated so clearly that it was clear she wasn't going to be a flash in the pan. It's no surprise therefore that all predictions for 2009 have been confirmed: Ernst not only won the World Championship in Quinghai, but she also returned to Innsbruck with her second World Cup victory with a score of 3 wins, one 3rd, one 5th and one 23rd place. In London the 17 year old placed third, behind the extremely stron Slovenian Mina Markovic and the winner of the 2009 Bouldering World Cup Akiyo Noguchi from Japan, confirming that the female future lies firmly in the youngest hands. Her most fearsome World Cup rival, Jain Kim from Korea, placed sixth in this final stage and took home silver overall, 62 points behind Ernst by 18 points ahead of the 2007 World Cup winner, the extremely strong Maja Vidmar.

In conclusion, after having mentioned the Overall results (which combine Speed, Bouldering and Lead) won by Ondra and Noguchi, we feel we can say that 2009 proved to be an interesting year on the rise. Interest for competitions seems to be growing (not by chance the Kranj final was aired live on Slovenian TV and climbing competitions seem to feature more and more on the internet in general) and the ability of the athletes continues to soar sky high as they raise the bar of what is humanly possible. Congratulations therefore to all those who contributed in rendering 2009 successful and see you in 2010 for the next battle. Rest assured the athletes are already focusing on it!