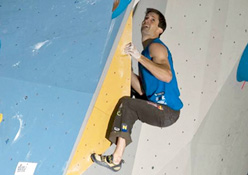 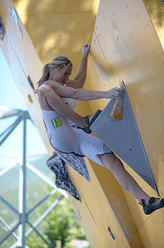 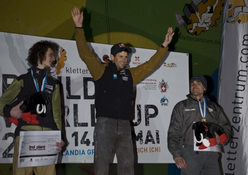 The Bouldering World Cup 2010 began last weekend and the start was almost as you'd expect it to be. Or rather, it's what dreams are made of, with the past, present and future mixing for an instant. In Switzerland's Greifensee Kilian Fischhuber (the bouldering competition dominator) duelled right to the wire with Adam Ondra (the new pretender to the throne), calling the comp his own thanks to his better Semifinal result. 1974 Italian born Christian Core has already already won all there is to win and he managed to place third and this bronze, more than an Career Oscar, seems a tribute to his class and imponderable game of bouldering. In the women's event the final was pretty much devoid of tops and the World ranking leader, 21 year old Alex Johnson from the States, had the better of impeccable Akiyo Noguchi from Japan and Chloé Graftiaux from Belgium who once again lived up to her reputation as being a versatile and untameable athlete.

It seems as if right from the outset Kilian Fischhuber is keen on affirming that he's a force to be reckoned with and that above all he has no intention whatsoever at giving up on the world domination which has netted him four overall titles. It's true that he'll have to battle it out against many strong rivals - this was to be expected - but this start provides excellent insight to the determination of the Austrian champion. The assault at the title is led by him, Adam Ondra. Not content with his Lead World Cup victory, the 17-year-old climbing phenomenon once again proved that he excels in all disciplines. Lead, bouldering, rock or competitions make no difference whatsoever: for him they're all climbing. And yes, when he starts climbing, he's practically unstoppable.

In the Semifinal Fischhuber placed provisional first with 3 tops in 4 attempts, ahead of the Russian Champion Dmitry Sharafutdinov (3 tops in 9 attempts) and Ondra (2 tops) which led to the final showdown. On the first three problems Adam collected three tops: the first in three attempts, the others straight off. Kilian on the other hand "wrestled" hard on problem number 2, sending it third go, whilst flashing problems 1 and 3. It was now time for the final, decisive problem, and Ondra and Fischhuber were perfectly level. Or rather, Fischhuber was slightly ahead due to his superior Semifinal result while Adam had qualified provisional third. Ondra needed to flash the final problem, and this is exactly what he did. Now it was Fischhuber's turn... the Austrian ace had just one chance to clinch victory: he too had to flash that final problem. He knew this all to well and he did just that, like a real champion. There's no two ways about it: it was a great competition and an even better start to the World Cup.

Clearly it's still early days to say whether this is the start of a long-running duel which will last for the entire season. What is certain is that it'll be interesting to find out whether Ondra will attempt the double-whammy, Lead and Bouldering. No one to date has managed such a fear, but nothing seems to be precluded from this Czech Martian. Also because a quick glance at the results shows the starteling gap between Fischhuber and Ondra and all the rest. Core, Lachat and Becan all sent just one problem, while Sharafutdinov and Kryukov failed to send even one... It's worth mentioning the immense effort of Christian Core who, in sending the first problem first go, achieved an extraordinary bronze. This just goes to show that if you're born a champion you're always a champion, regardless of your 36 years of age. And it comes as no surprise therefore that one of the greatest Italian competition climbers and boulderers dedicated his medal to the unforgettable team trainer Giovanni Cantamessa.

The women's leadership is less clear and even if Alex Johnson won the event, the final in Greifensee indicates that many others are in with a running chance. Four athletes, namely Johnson, Noguchi, Graftiaux and Avezou all sent only one problem in the final, and Johnson beat the winner of the 2009 Bouldering World Cup by a hair's breadth, or rather, by one attempt less. After "winning" the Semifinal Chloé Graftiaux from Belgium won bronze thanks to her fewer attempts - 2 instead of 4 - needed by Cecile Avezou from France.