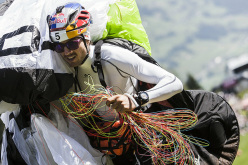 Aaron Durogati, the only Italian athlete who will take part in Red Bull X-Alps 2015
Photo by Red Bull Content Pool

Preparations are in full swing a unique adventure race: watch Aaron Durogati, the only Italian taking part in Red Bull X-Alps 2015, the world’s most spectacular flight competition across the Alps.

1038 km to be covered as quickly as possible across the Alps, past epic climbs in the mountains, incredible battles between the star athletes, complex tactics and teamwork. All this is Red Bull X-Alps, the spectacular adventure race that combines hiking and paragliding that gets underway on 5 July at Salzburg, Austria. Among the 31 athletes who will take part in this epic undertaking is Italy’s Aaron Durogati, 29, paragliding world champion taking part in his second consecutive appearance after his superb 7th place in 2013, an excellent debut result.

Having fully recovered from the serious injury last autumn while training for Red Bull X-Alps the South Tyrolean’s stated aim for 2015 is only one: to win. Aaron is gearing up to take advantage of his flying skills and knowledge of the mountains to beat his opponents and clinch victory.