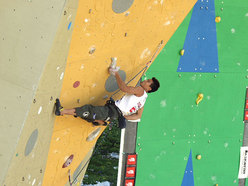 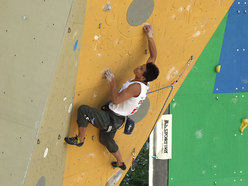 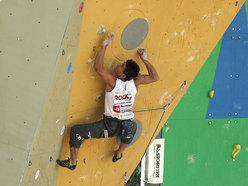 On 9 June Yuji Hirayama on-sighted his second ever 8c, "Pata Negra" at Rodellar in Spain.

Yuji Hirayama is back with a vengance. Those in the competition circuit know this only too well: in May the 1998 and 2000 World Cup winner surprised all by turning up to place ninth in the first stage of the World Cup 2007! And if that isn't proof enough of his fighting form, on 9 June the 38 year old on-sighted his second ever 8c, "Pata Negra" at Rodellar in Spain. This ascent came about during a furious week-long sending spree, in which the Japanese climber also on-sighted four 8b+, three 8b, eight 8a+ and one 8a!

Hirayama's first 8c on-sight also happens to be the world's first 8c on-sight and dates back to October 2004, when he sent "White Zombi" straight off in the Baltzola Cave in Spain. For the record, Pata Negra was on-sighted in 2005 by Tomas Mrazek from the Czech Republic, and in 2006 by Patxi Usobiaga from Spain.

We used this occasion to check in briefly and find out more from the man himself.


Welcome back to Europe Yuji. How does it feel?
So many routes to climb! Just kidding! Being in Europe is kind of nice, especially because I spent so many years here in the past.
How's the climbing?
In Japan the climbing is kind of hard, the routes are short and there is mostly bouldering. So when I climb many long routes in Spain I feel really comfortable.

When you on-sighted White Zombie you told us you felt you could have climbed harder. That was in 2004. What about on Pata Negra this year?
Yes... I felt very similar on Pata Negra! But the climbing was different than in 2004. This time I felt like I didn't need so much preparation for it - only a couple of hours of observation and then I tried "Pata Negra" on-sight.

Less preparation - because you're stronger or because there is less pressure?
Yeah both... In 2004 nobody had done an 8c on-sight... I had historical pressure. And of course after 2 years and 8 months, I've got much more experience... and I'm stronger as well. I hope that I can continue this way!
You are back competing in the World Cup which you won in 1998 and 2000. How have things changed over this last decade?
There is a much higher level today than before. I feel I need to be strong and somehow I need to adapt to today's competition style. The routes are much harder... and more complicated to understand. But I am very happy that the young generation respects me... I can feel this. I'm sure you know what I mean ;-)