► News ► Climbing ► Yuji Hirayama, Cobra Crack and back to his roots
Versione italiana 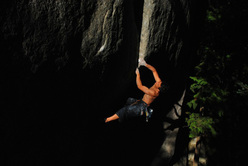 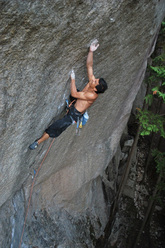 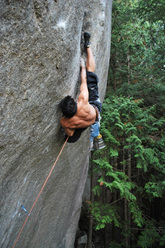 PORTFOLIO / gallery Portfolio: Yuji Hirayama, Cobra Crack and back to his roots

Yuji Hirayama, Cobra Crack and back to his roots

Interview with Japanese climber Yuji Hirayama, who on 15/09/2009 made the sixth ascent of Cobra Crack at Squamish, Canada.

Two weeks ago Yuji Hirayama carried out the 6th ascent of Cobra Crack, the 30m overhanging finger crack freed by Sonnie Trotter in June 2006 at the Cirque of the Uncrackables, Squamish, Canada. After his climb Yuji stated that his ascent "wasn't bad for an old trad climber." This comment may come as some surprise to many who associate Yuji more with sport routes and competitions than trad, but in truth the Japanese ace has his roots firmly set in his trad rack. In 1986 and at 17 years of age he caught world attention with ascents such as Phoenix and Cosmic Debris, two 5.13a's in Yosemite, while a decade later he upped the ante with the ground breaking ascent of Colorado's The Sphinx Crack (5.13b/c), not to mention his famous attempt at the Salathe on El Capitan in Yosemite. It is for this reason that the words Yuji used couldn't go by unnoticed. We decided to find out more.


Hi Yuji, the first question is easy: why do you define yourself as an old trad climber?
Because I'm getting old... No seriously, I always observe how different people are, this is because of where they come from, how they grew up. For me this is an interesting aspect of climbing, this background makes up the climbing identity of each individual. In my case my background is old school trad. I started climbing 25 years ago on trad and my aim at the time was only to climb hard trad cracks. My biggest goal was to climb routes like Sphinx Crack or Grand Illusion, and for two years I didn't concentrate on anything else. I feel my roots are set in trad climbing, only later did I switch to sport climbing, then competitions, then the gym.

You mentioned the Sphinx - is this one of your most important trad on-sights?
Yes, but I'd rate my attempt at on-sighting the Salathe as even more important, for sure. My attempt failed, but the whole experience leading up to the climb was more important for me. On-sighting the Sphinx was obviously an interesting moment, to do it I had to use my trad base and draw from all my sport and competition experience. It was this ascent which opened my eyes to new possibilities, it provided me with the idea of climbing the Salathe two years later. That was back in 1995. I'm not sure if the Sphinx has ever been on-sighted again, it would be interesting to know!

What do you need to climb the Cobra?
You need lots of qualities... You need to be able to place the pro quickly, be good at jams and be especially good at taking the pain! The route is really hard on the skin. This meant I couldn't try it much, just twice a day, but each time I tried I had maximum concentration. In my mind it was like trying a 9a sport route.

Maximum concentration in the middle of the beautiful Squamish forest...
Canada is great! This was my first visit here, the landscape is beautiful and I met lot's of really nice people. Squamish is interesting because there are so many different types of climbing: trad, bouldering, sport and multi-pitches. The rock is solid granite and it felt so fresh to be in the wild forest. Apart from the Cobra, during my stay I also carried out the first on-sight ascents of the trad routes Zombie roof 5.13a and Flight of challenger 5.12c. When the weather was bad we travelled to Vancouver Island, where I did some first on-sights of hard sport routes such as Dinosaur Highway 5.14a, Globe trotters 5.13c and Moment of silence 5.13c.

Talking about sport routes: a few years ago you carried out the world's first 8c on-sight. Now we're seeing 9a's being climbed at an incredibly fast rate. How do you interpret this?
It's incredible. These guys can boulder hard, have great endurance. I think they can imagine doing 9a on-sight. If I were in their position... I'd seriously think about that. What is important though is that they continue to push their limits as long as they enjoy themselves. What is also important is that we sometimes need to focus less on the grade and more on the actual route – don't ever forget that there are so many great climbs that aren't necessarily 9a!

How does Yuji Hirayama compare climbs and ascents?
Wow, this is a serious question! First of all, it think it's important to understand what I said before, that numbers are important but not that important! They are simply one aspect of climbing. There are so many other important things in this sport and what is interesting is how a climber picks these up and expresses them. Numbers sometimes hide important and interesting facts, so we shouldn't focus too much on a grade or number of attempts. For me personally, what I like is what you imagine about a route, the process you undergo to climb it, your motivation.
What is also important is that sometimes grades are an indication, but they really mean very little. For example, Flight of challenger is a 5.12c (7b+) trad climb in Squamish. I'm certain that it's harder to on-sight than many 8a+ sport routes. I know I shouldn't compare trad with sport too much, but what I'm trying to say is that great climbing is not only in the number, there's so much more to it that gives profound joy!