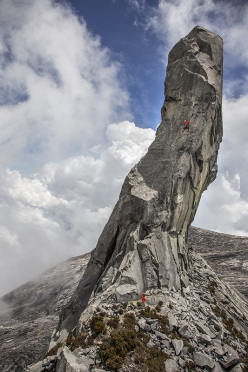 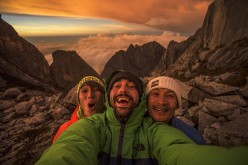 The Japanese climbers Yuji Hirayama and Sachi Amma have spent three weeks climbing at Mt Kinabalu in Borneo, where they have established a flurry of new routes and where Amma made the first repeat of Tinipi 9a+.

Rock climbing legend Yuji Hirayama and 013 and 2012 Lead World Cup winner Sachi Amma have recently returned from an exciting trip from Mt Kinabalu on the island of Borneo where during their 3 week stay at above 3000m they managed to establish a series of new routes and make some important repeats.

Amma made the second ascent of Excalibur 5.14c as well as the second ascent of Tinipi, the stunning 9a+ bolted by Hirayama and freed in 2012 by Daniel Woods - an impressive feat as the line is located at almost 4000m. The duo also concentrated their efforts on Jerung, a line previously bolted by Hirayama which, for the time being, remains unclimbed for the time being. Located on the steep 100m face of St Andrew peak, Hirayama commented "When I finished bolting I realized that this would must not be for me, but more about younger generation like Sachi. He spent 4 or 5 days with rainy condition on Jerung and worked out 2/3 of the moves. He said that these are already more difficult than 5.15c, so I can only imagine what the rest of the route is... 5.16 perhaps?"

Amma took the drill to hand for the first time to make the first ascents of Orion and Union, both 5.12c, and after the successful trip Amma commented: "Yuji taught me how to bolt, find a line, clean the holds etc. This process is a lot of work, but I learned many things. Jerung on the other hand is definitely next level. I cannot imagine climbing it at the moment, but I certainly want to try again. Next year we're planning to come back, there are many beautiful peaks which still aren't developed, I'm eager to return!

As to Tinipi, Amma stated: "Yuji worked Tinipi 5.15a. He said it is the best line he has ever put up by himself. Yuji san is 46 years old now, so far he's never climbed 5.15 and althought he feels he might not succeed, I reckon he’s capable of doing it in a few tries! Tinipi means "Dream" in the local language and it is going to be crazy news if one day his dream comes true!"