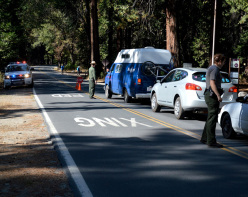 PORTFOLIO / gallery Portfolio: Yosemite and all U.S. National Parks closed, for climbers too

Yosemite and all U.S. National Parks closed, for climbers too

Following the U.S. Shutdown, all National Parks are now officially closed such as Yosemite National Park where the climbers on the big walls will be the last to leave.

As reported in newspapers worldwide, the closure of monuments, offices and national facilities because of the Shutdown, ie the failed agreement in Congress on 2014 federal spending, has now taken full effect. The stop - which we reported about on Tuesday after the new women's speed record on The Nose - also affects the more than 50 National Parks including, from our climbers' perspective, in particular Yosemite that as of yesterday is currently officially closed.

While tourists were given until 15:00 yesterday to leave the park, those who at that time were climbing on the numerous big walls continued to proceed upwards. In yesterday's ElCap report Tom Evans wrote "Climbers on the walls will not be bothered and will be able to come down and gather their things without any problems." Which means that when they eventually descend into the valley they will discover it unusually empty, as a reader rightly pointed out: "I imagine it'd be surreal, especially for anyone descending Friday after the evac."

Some wonder whether the climbers up on the big walls know about the stop, but there can be no doubt that the news spread up high, too: while trying the crux move on Freerider, one of the most important free climbs up El Capitan, James Lucas heard loud and clear the following message reverberate on the smooth granite rock face: "Government shutdown. Yosemite National Park will be closed for recreating." It's worth noting that the crux isn't on the first pitch, but more than half-way up the wall...

Those who has just arrived - such as disabled Frenchwoman François Vanessa who after a year and a half of training hopes to climb the Zodiac route on El Capitan this autumn with Marion Poitevin and Liv Sansoz - is currently blocked outside the park entrance. And with no date in sight for a possible Congress agreement and the subsequent reopening of the parks, many climbers are now heading towards other climbing areas.

This is not the first time that the U.S. National Parks have been closed: in 1995 they were closed for 5 days, while in 1996 the stop lasted 22 days. A loss, and economic damage, of huge proportions: according to the American Outside magazine the last shutdown cost the parks nearly 14 million dollars a day!