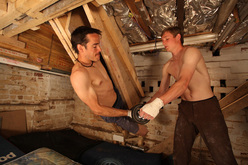 Pete Whittaker and Tom Randall are touring the USA, where at Vedauwoo Whittaker on-sighted the offwidth Lucille 5.13a.

British climbers Pete Whittaker and Tom Randall are on a mission. After preparing painstakingly for months and months (read over 5000m of specific training in Randall's cellar), the two are now at large in the USA on their Wide Boyz trip in search for some of the hardest off-widths in the country.

First stop: Vedauwoo in Wyoming. During their first week Whittaker and Randall dispatched some Bob Scarpelli classics such as 'Squat' 5.12b and Trip Master Monkey' 5.12b, as well as 'Spacial Relations' 5.13a, 'Wormdrive' 5.11b, ''On a Wing and a Prayer' 5.12c and 'The Big Pink' 5.11b. The Brits then set their sights on one of biggest prizes of all, Jay Anderson's 1988 5.13a testpiece 'Lucille'.

First repeated, on-sight, by the late Craig Luebben and repeated in this style by Pamela Pack Varco, Whittaker also managed to on-sight the line and stated: 'Tom and I were pretty apprehensive about the route as it is one of the biggest offwidth lines in the world. I set off nervously but soon got into a rhythm through the horizontal squeeze section. I got into such a rhythm of shuffling and advancing chicken wings that I forgot to place any cams after the roof and managed to turn into the vertical section quite run-out and very out of breath, however I soon found myself on easier ground and shuffling towards the anchors.'

Next stop Utah's deserts, then Indian Creek and Zion. No doubt there'll be more to come. For more information about the trip check out photographer Alex Ekin's blog.