Steve McClure making the the second ascent of Olympiad E10 6c at Pembroke in Wales, May 2021
Photo by BMC / David Petts 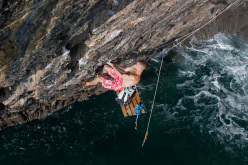 Neil made his early attempts from a home-made portaledge, but he later decided this was unethical and found a way of traversing in from a cave on the right
Photo by Martin Allen 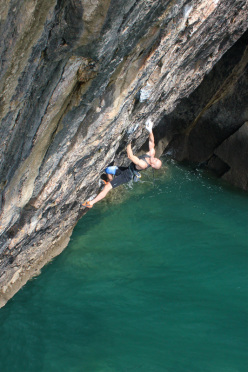 Neil tried the route in June, wearing a shorty wetsuit but was forced to abandon ship until the water warmed up in late July.
Photo by Martin Allen 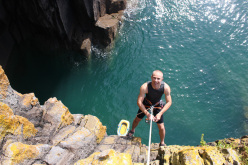 The unorthodox abseil approach to Olympiad!
Photo by Martin Allen

The video of Steve McClure making the the second ascent of Olympiad E10 6c at Pembroke in Wales.

In May 2021 Steve McClure made the second ascent of Olympiad, a climb established by Neil Gresham in 2012 at 8b and climbed as a deep water solo. McClure opted to repeat it as a trad climbing when the tide was out and, as such, the route is graded E10 6c. It is, in McClure's own words "a gem of a route, probably the hardest piece of climbing in Pembroke." Here’s his story.