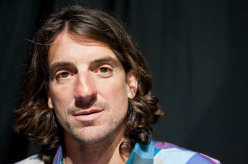 Six years ago today Dean Potter, one of the most famous rock climbers in the world, perished in a wingsuit accident in Yosemite Valley together with Graham Hunt. Reel Rock have released remastered footage of Potter making a solo ascent of the Rostrum with the Alien Roof finish.

America's Dean Potter perished in a wingsuit accident in Yosemite Valley together with Graham Hunt on 16 May 2015. For the two decades prior to his death the talented and eclectic climber was recognised as being the de facto leader of the Yosemite monkeys, and was a pioneer in what he called "the dark arts" -- free solo and speed climbing, BASE jumping and wingsuit flying, and highlining.

Potter combined his pursuits to conceive the idea of FreeBASE - free solo climbing up tall, overhanging walls, with a BASE jumping parachute on his back for a marginal degree of safety should he fall.

To celebrate Potter and his achievements, Reel Rock have released remastered footage of his freeBASE ascent of The Rostrum, with the utterly exposed Alien Roof finish (5.12). Carried out in 2008, at the time it was the hardest long free solo ever done in Yosemite. The footage featured in an episode of the "First Ascent" series.

09.01.2013
Dean Potter does the Moonwalk
Dean Potter walks a highline at Cathedral Peak in Yosemite.

09.05.2012
Dean Potter: Race for the Nose
The video of Dean Potter and Sean Leary and their speed ascent of The Nose, El Capitan, Yosemite.

19.08.2008
Dean Potter: FreeBASE on the Eiger
On 6/08 American climber Dean Potter carried out the first FreeBASE ascent of Deep Blue Sea (Eiger, 5.12+/7b+), climbing without a rope but with a B.A.S.E. parachute.
01.10.1999
Dean Potter & Hans Florine - good climbing news from Yosemite Valley
At the end of July, Dean Potter and Hans Florine made what may go down as one of the biggest achievements in the history of climbing in Yosemite.