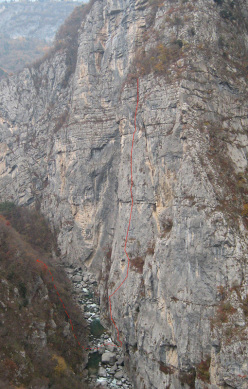 In June Francesco Salvaterra and Nicola Binelli made the first ascent of Via del Guerriero (VI+/VIII-/A2 R3), a new route in the Gola del Limarò close to Arco, Trentino - Alto Adige.

The rock face is hidden and located in an incredibly beautiful and wild part of the canyon called Gola del Limarò. We spent three days making the first ascent, using fixed ropes and topping out on the pillar close to the village Ranzo.

The first section of the route follows a series of weathered slabs while the second continues up a series of cracks that take trad pro. On the whole the rock is sound and compact, but there are some short grassy or loose sections. During the first ascent we breached difficulties up to VI+/A2 and this was all freed at a later stage, except for a 5m section on pitch 2. All pegs have been left in-situ; while the pro is good, it nevertheless needs backing up with trad gear.

Nicola and I decided to dedicate this new route to our instructor Mauro Giovannazzi, who died tragically not long ago. Mauro always told his students that you must believe in your dreams and always fight for them, that you need to be a "Guerriero", a true warrior.