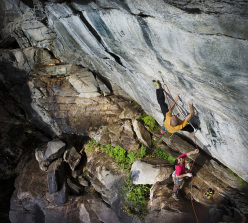 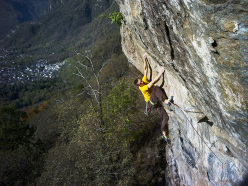 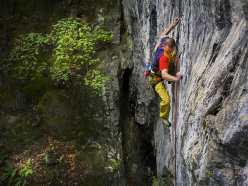 Compulsory Clip 8a, the gem created by Davide Grassi
Photo by Massimo Malpezzi 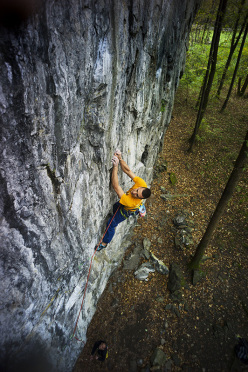 In recent years numerous difficult new routes have been established throughout Val Chiavenna thanks above all to two climbers who in the following article share their enthusiasm for these new areas and also look back at the person who first started all this, their friend Davide Grassi.

Photographer Massimo Malpezzi documented the action on the latest routes put up by Enrico Baistrocchi and Matteo Deghi and this reportage brings to the forefront some historic crags such as Mezzera and Scilano as well as the new crag Caprone bolted by Carlo Lisignoli, Marco "Chino" Geronimi and Matteo Deghi.

The theme that unites them all is the quest for a beautiful line, for the rock, moving over it and above all deep friendship, marked by a hint of nostalgia but also gratitude towards those who enabled all this; without Davide Grassi certain ties and visions would not have been created in this beautiful valley. Every time these climbers go there, they cannot help but think of him.

Sole e Acciaio, Sun and Steel, is the title of a book by Yukio Mishima, the Japanese philosopher who analyses the importance of culture, of the sun that nourishes the earth, discipline in physical activities. The steel plough that plows the land is an ancient metaphor tied to the traditions of the samurai culture; but that's another story.

Sole e Acciaio is the name I chose for one of the most important routes I've ever bolted, perhaps the absolute apex in terms of beauty and effort needed to climb it; but that too is another story.

Sole e Acciaio would never have come about had it not been for my friendship with Matteo and in particular had I not been so in love with Val Chiavenna, with its infinite potential, with its at times stunning rock. All these pale into comparison though when compared to the all those who climb there; but that's another story.

The story I want to tell is that of Davide, viewed through my eyes and described in my own words. Although Davide passed through my life far too quickly, he left a mark which even today I find hard to measure: his enthusiasm, his continuous quest for the perfect move and line, his unmistakable voice and his very particular way of holding crimps that hurt when just looking at it. He made me understand what I really wanted to get out of my climbing by enjoying every moment I had with him, and it was he who introduced me to Val Chiavenna.

I didn't think he'd left such a deep mark and I notice this almost every day when, in one way or another, my thoughts drift to him. It is then that I realise how important what he did for me is: put simply, he inspired me.

Every now and then I find myself digging deep into my memory because I'm afraid I'll forget some of his expressions, some sentences, thoughts and all the crap we talked about, when this happens I stop and think, worried I'll fail but fortunately, as if by magic, the recollections return, I smile once again and I'm overcome by a sense of calm; but that too is another story.

I started climbing when I was 13 and now that I'm 23 I can say I've had many teachers. From each climbing partner I've always tried to learn as much as possible... I've always enjoyed watching, observing, discovering and understanding how they "move" in given circumstances, studying and learning the techniques and styles of all of them and making use of it all in the future.

I certainly owe something to everyone: experience, motivation, confidence, tenacity and more. But I look back at Davide Grassi with particular nostalgia, affection and gratitude because it was he more than anyone else who revealed to me the beauty of this sport. I was only just a beginner and together we discovered new crags, all the different rock types, I learned to climb better, manage my strengths and weaknesses, heed all- important advice.

With Davide I discovered and got to love Chiavenna and its vast potential of virgin rock. Davide began by sorting out some old routes and creating some new ones, together with Guido Lisignoli and Pio Scaramella he developed the crag Scilano, bolted one of the most overhanging crags in Val Chiavenna called "Il paradis di omm", together with Pio Guanella he bolted the crag "Biscione"... all this following his method, his logic which translated into bolting logical lines, without and "artificial" modifications. This method has now become mine, too.

Unfortunately Davide left us a few years ago along with another friend, Francesco Oregioni, while climbing in the Mont Blanc massif. Recollections of him and his teachings continue to live on though and along with a group of friends we try to continue where he left off... it's a beautiful way to feel close to him.

This is how many new routes in Val Chiavenna were created, at Mezzera, Scilano and Sasso del Drago. New crags were developed such as Caprone and Ciclabile, offering varied climbing on all types of rock. The potential for new routes in Chiavenna is still enormous and I hope to continue bolting new routes, increasingly beautiful, with my friends and continue to do what David taught me.