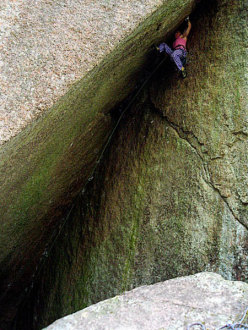 At the start of June 31 year old Perttu Ollila made the first ascent of "Trad Master" at Pärkänvuori, describing it as "the best and hardest dihedral in Finland."

Trad Master takes a rightwards rising crackline through the Veskellar cave and was first ascend in 1998 by Mikko Söderlund with the use of aid. On Söderlund's insistence Ollila checked out the moves of this "mythical dream climb" early this year and success came about this summer. Ollila recounts "on the 2nd of June I redpointed the first free ascent of Trad Master, topping out exhausted, my calves exploding, my skin whipped, but with surprising “ease”. I refuse to undress the aura of Trad Master by giving it a number which I would sandbag anyway. I also like to step out of the rather mundane grade game. On a purely aesthetic level the free ascent of Trad Master is my south-western magnum opus - it is unlikely to find another line that is visually so killer cool and has such an amount of uncanny crack climbing. For sure it is the best and hardest dihedral in Finland.'

Despite the lack of grade, the first free ascent of Trad Master is a relevant moment in Finnish climbing history and with over 170 new routes under his belt Perttu Ollila is renowned as being one of the best and most active trad climbers in the country. Pärkänvuori is a typical south-west facing cliff with somewhat coarse granite and a plethora of cracks. Circa 50 routes have been established on the slabby south-west face and its steep north-east wall.

For those wishing to find out more about rock climbing in Finland (which is both trad and sports up to 8c) and its history, check out the excellent
www.slouppi.net