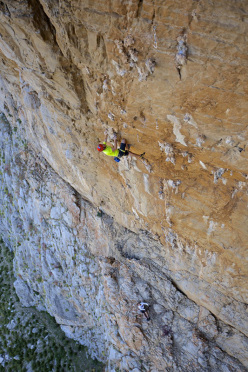 Tommy Caldwell and Josh Wharton during the first ascent of You Cannoli Die Once (7c/+, 6 pitches), established together with Sonnie Trotter on Monte Monaco, San Vito Lo Capo, Sicily.
Photo by Sonnie Trotter 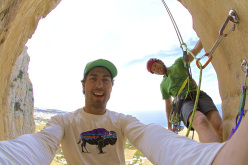 On Monte Monaco at San Vito Lo Capo in Sicily Tommy Caldwell, Sonnie Trotter and Josh Wharton have made the first ascent of the new climb You Cannoli Die Once (7c/+, 6 pitches).

American climbers Tommy Caldwell and Josh Wharton and Canada's Sonnie Trotter have just finished holidaying at San Vito Lo Capo in Sicily, Southern Italy where they managed to establish a 6-pitch route up the town's most famous landmark, Monte Monaco.

The new route takes a steep line to the left of La Lingua Pura and was bolted from above over 2 days, due to time constraints and also the fact that they preferred to not take excessive risks on what looked like a line of friable tufas, especially in view of the fact that all three have recently become fathers. The trio made the first free ascent of the route on the 9th of June and while it turned out to be somewhat easier than they previously thought it nevertheless offers steep climbing up to 7c/7c+ up excellent quality rock. According to Trotter the new route, You Cannoli Die Once is a "great climb and a nice line for future climbers to enjoy, it contains two of the better pitches I've climbed in San Vito".

During the trip the trio visited most of the local crags and also repeated the multi-pitch La Lingua Pura, which they felt more in the region of 7b max, not 7c. Commenting on the San Vito experience prior to heading to Switzerland, Trotter said it was “the perfect blend between a family and climbing vacation. Great quality rock, a beautiful beach, hundreds of routes to choose from, convenient, and absolutely stunning.”

Trotter said "It was always a dream of mine to put up a route on Monte Monaco ever since I saw the pictures on planetmountain.com from Blow it up on the Internet. It looked like a great place, a fun adventure and a wonderful place to climb some rocks, so it was rewarding for me to finally get up there, to find such a great steep section of rock and to hopefully give something back to the local community."