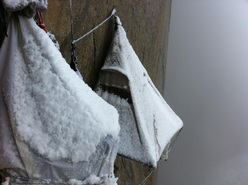 The latest updates about Tommy Caldwell, currently engaged in his demanding attempt to free the Dawn Wall on El Capitan, Yosemite, USA.

The last time we left him, Tommy Caldwell had just sent the first 10 pitches and was climbing rapidly on his Dawn Wall project. But things then changed: he started to tackle the crux pitches and, as if these immense difficulties weren't enough, he also had to reckon with the weather, first snowfall and rain which ground progress to a halt while he waited out the storm.

The real problem however is pitch 13, the same one which had stopped him and Kevin Jorgeson last year and after a series of attempts (and new partners in the form of his father and also Kelly Cordess) the American heavy heartily abandoned his single-push attempt, abseiled down into the valley and recharged his batteries.

Now though he is up on El Capitan once again, attempting number 13 which for some is unlucky while for others represents a truly magical number. We, along with his 4000+ fans on facebook, look forward to this positive magic!