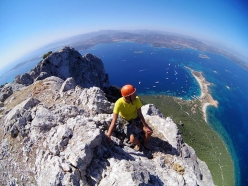 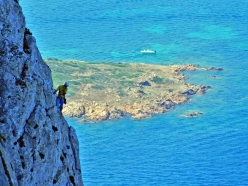 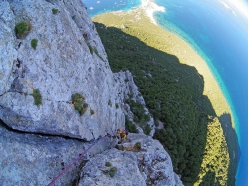 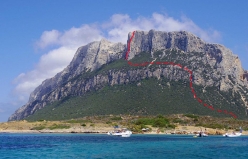 Tavolara, climbing on the Sardinian island shrouded in myth

Maurizio Oviglia explores the fascinating climbing history of Tavolara Island, off the NE coast of Sardinia, and repeats 'Affora sa nato’ (6b, 215m) first ascended by Enzo Lecis and Simone Sarti in the ’90’s.

Tavolara is one of the wonders of the Mediterranean, an island that rises out of the sea to more than 500 meters in height like a giant petrified ship, surrounded on all sides by steep cliffs of excellent quality.

The place is shrouded in myth and ancient legends, and always catches the eye of those who, traveling from "mainland" Italy by ferry, reach the port at Olbia. I reckon all climbers who have laid their eyes on the island have day dreamed about those cliffs, and wondered why they’ve never been included in the local guidebooks. As it happens, news about the first routes dates all the way back to the early seventies, when climbs were established by the usual Predazzo finance police, the same climbers who were the first to explorer the Supramonte of Oliena area inland. Yes, they too climbed some routes on the island’s cliffs! Did you know about this?

Rumor has it that they didn’t publicise their climbs as they hadn't received permission from their superiors, yet the climbs were nevertheless written up by Alessandro Gogna in his guidebook "bible" to Italy called Mezzogiorno di Pietra. Shortly afterwards Tavolara disappeared from all subsequent Sardinia climbing guidebooks and the island became wrapped in mystery: can one climb there? Or is climbing banned? Who does one need to ask if you want to climb a new route there? As wikipedia states, the island is private and access to its summit remains prohibited, unless you possess valid authorisation. That was enough for Gino Buscaini to remove it from my guidebook Sardegna, and for the same reason I chose to exclude the island from subsequent editions of my Pietra di Luna.

Having said that, rock climbing of the island did not stop, on the contrary, it continued to evolve in more or less an "illegal" manner... At the end of the seventies Germany’s Bodo Habel put up a handful of trad routes; shortly afterwards Giuliano Stenghel, the talented alpinist from the Dolomites, fell in love with the island and forged many new routes, often teaming up with local Sardinian climbers. All routes climbed up until then were trad routes, with no in-situ gear. The first modern climb dates to the nineties at the hands of the Lecis and Sarti, and as reported by Gogna in his latest book, if a crime was committed, surely the statutes of limitations have long since expired... :-)

Never published properly and rarely repeated, this summer I had the opportunity to repeat their route on two separate occasions and cleaned it up a bit, removing some of tvegetation and adding some threads. Contrary to what Alessandro Gogna wrote in his book La pietra dei sogni, I don’t believe their route crosses that of Via dei Finanzieri. If anything, it climbs close to the route put up by Bobo Habel, although the two never cross. At least, according to my research. So, perhaps, the time has finally come to publish more information about this beautiful climb!

When all things are said and done, the question remains: can one climb on Tavolara? Who knows… you decide... Bear in mind that every summer hundreds of hikers ascend Punta Cannone, the island’s highest point, which offers a spectacular view across the bay. They do so with the help of fixed ropes, and all other types of artifacts, accompanied by excellent local hiking guides (non-experts should be accompanied at all costs). So why can’t climbers climb on the island?

Particular attention should be paid to sticking to the access paths mentioned in the topo, and once on the island one should avoiding entering private property. Who knows, maybe you’ll even meet the "King" of Tavolara, who is actually a really kind person who doesn’t mind that his part of the island has become popular with tourists. Oh yes, because there’s still a monarchy on the island, did you know?! To find out more I recommend Giuliano Stengel’s book "Nonno… perché abbiamo i denti d’oro?" "Grandfather... why are our teeth gold?"