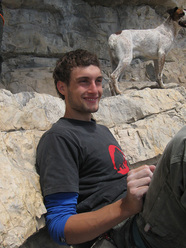 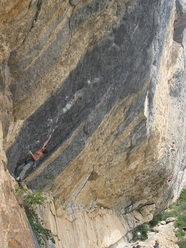 On 07/03/2009 Silvio Reffo from Vicenza carried out a rare repeat of Drumtime, the super route at Fonzaso.

The first time we talked about Silvio Reffo was at the start of 2007 after the 16 year old had carried a series of hard repeats, including a rare ascent of the ultra-classic "Mare Allucinante" 8b+ at Lumignano. During the last three years Reffo has continued to climb and push his limits, and this culminated two Sunday's ago with a redpoint of Drumtime, the super route at Fonzaso first ascended in 2006 by Riccardo Scarian, initially graded 9a by now consolidated at 8c+. Reffo's ascent is outstanding, especially if you bear in mind that apart from Scarian, these 40 odd moves have been linked only by some of Italy's strongest, in the form of Luca Zardini, Paolo Munari and Dino Lagni. Reffo is certainly one of the most promising climbers of the new Italian generation, and his brief report is published below.

"Climbing is a way of maturing, travelling, learning and having fun. Since starting university my life has become more frenetic and climbing has increasingly become a need, a valve to let off steam. My training has become more efficient and focus, thanks also to Scialpi which trains me specifically for competitions. I have to say though that despite the excitement of competitions, climbing outside remains decisive to measure my progress and for the unique sensations a route transmits, where hand and footholds follow one another to form a melody of perfect moves."

On Drumtime I discovered a line which presents a great variety of moves, with a bouldery start and a fingery slab followed by a sequence of slopers and powerful moves which lead to a delicate, surprising finish. The route pumped my forearms and filled me with joy when I managed to stick the final edge after a massive shake which, for those who know me, is just the way I climb."