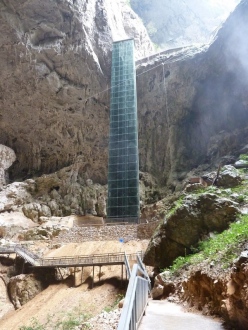 Save Getu from Destruction: the new elevator
Photo by Alberto Selmin / Save Getu 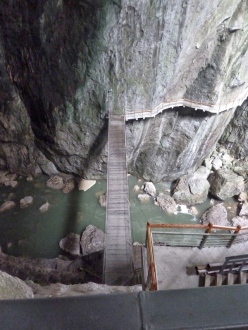 Save Getu from Destruction: the bridge
Photo by Alberto Selmin / Save Getu 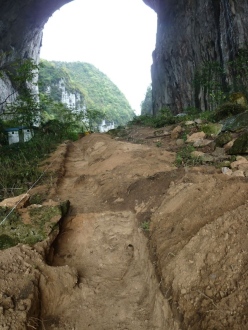 Save Getu from Destruction: the new path
Photo by Alberto Selmin / Save Getu

Save Getu from destruction!

The appeal by Alberto Selmin and a group of residents and local climbers to stop the development of a hotel and restaurant below the famous Getu arch in China.

A few days ago I returned from a trip to Getu, the village located in the Guizhou region of China famous amongst climbers for having hosted the 2011 stage of the Petzl Rocktrip, the one everyone remembers with the enormous limestone arch high above the river GeTu.

Unfortunately the peaceful environment I recalled from my last visit in 2011 has been completely altered due to the construction of a huge parking lot and an elevator that will transport people from the parking lot to directly below the arch. I had heard about this from friends and had quietly accepted it as yet another example of how the local governments try to encourage tourism via huge building developments, yet this development is often too ephemeral for the villages in rural China and probably jeopardise forever a beautiful and complex natural environment.

I reached the start of my favourite route and realised that the base was occupied by a cement power station and some workers on their lunch break. I was curious and so I asked them what the power station was for and why the surrounding area had been cleared of all its vegetation, and they candidly replied they were preparing to lay the foundations for a restaurant and hotel, circa 70m long and 20m wide, that would occupy more than half of the righthand side within the arch. On our return to the village and friend and I started to ask around and we discovered that a while back the farmers had courageously organised a protest against this eyesore, but this was quickly crushed by the police and four protesters were jailed for a dozen or so days.

In an attempt to help them, we decided to write an article (in English and Chinese) to let the world know about what is happening at Getu. We hope that by involving the international climbing community, a sufficient number of people will become interested in this project and the development will be stopped, as has already happened on several occasions here in China.

We are therefore asking for your help, please share this article on the social networks and talk about it as much as possible, if you work or know anyone who works with organisations that safeguard the environment on an international level please put them in contact with savegetu@gmail.com. Any advice is more than welcome.


STOP THE DESTRUCTION OF GETU!
The online appeal published on www.savegetu.blogspot.com

China’s magical Getu National Park, situated in the southwestern province of Guizhou, is a 70-square-kilometer geological wonder and an ecological sanctuary. It has a majestic cave, enormous karst caverns, complex underground river systems and rare species of swallow, fish, hemp, and bamboo.

For the last two years, developers backed by government officials have relentlessly destroyed the lower cavern system, cemented stairs into the ancient walls once scaled only by the gliding swallows and legendary locals using stick ladders, constructed a suspension bridge and a glass elevator.

To construct the expanded parking lots and gates, so throngs of visitors can conveniently drive into the peaceful valley, developers and officials forcibly appropriated hundreds of acres of farm and forest land from the locals, many of the ethnic Miao descent. Local people’s protests were suppressed by police deployed by the local officials. Four most vocal leaders were jailed for 10 days.

Now the damages to the lower portions of the caves done, developers have moved for the “holiest of the holiest,” the Chuanshang, or Through Upper Cave, under the Great Arch! Workers are already clearing the delicate vegetation to make site for a hotel and restaurant!

The following two photos were taken on April 10, 2014. Within a few days, more irreparable damages will be done! This destruction must be stopped immediately!

Please help make the world aware of what is happening to this sacred site, forward this to your friends, your local Chinese consulates, UNESCO, WWF, to anyone who loves and cares for all that are natural, beautiful and just.