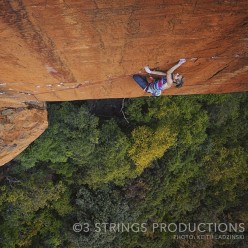 American climber Sasha DiGiulian has made the first ascent of Rolihlahla, a new 8c/+ at Waterfall Boven in South Africa.

American rock climber Sasha DiGiulian is back on form after injuring her finger and after a long "break-in period", yesterday at South Africa's Waterfall Boven she made the first ascent of Rolihlahla, an old project bolted by Andrew Pedley. DiGiulian needed just three days to redpoint the route (the same number as for Pure Imagination) and the 20-year-old estimates difficulties somewhere in the region of 8c/+.

Two aspects render this ascent particular: firstly it is one of the hardest female first ascents ever, and adds to those of Charlotte Durif in France and Angela Eiter at Arco in Italy. And secondly Rolihlahla happens to be the first route DiGiulian has ever freed.