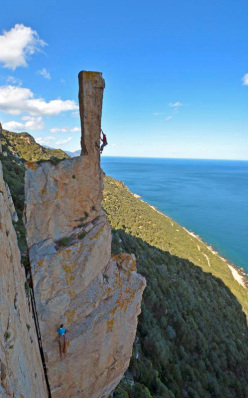 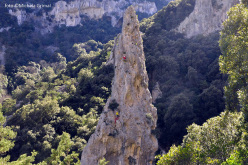 The report by Maurizio Oviglia about two beautiful needles in Sardinia: the recently restored Dillosauro 6b+, first climbed by Enzo Lecis in 1995 and Sinfonia del mulino bianco, the new route established together with Giorgio Caddeo above Baunei.

Recently I've been keen on climbing needles. Slender towers, not particularly high but certainly exciting and I wanted to share two with you. The first was climbed back in 1997 by Enzo Lecis but I rebolted it due to a rockfall on the lower section which had rendered it unclimbable, while the second route was still virgin, hidden in the folds of the Baunei Supramonte massif, one of Europe's wilder areas...

Dillosauro is located at the Jurassic Park crag on the east coast of Sardinia, and offers exciting climbing up beautiful granite. We retraced the path to get to the base of the face (this still isn't easy to locate) and I created a new link between two different routes that Lecis had bolted in 1995. I also replaced all the old, salt-corroded aluminum hangers. The first pitch is a fantastic and impressive corner, the second a thin arête.. The top is as wide as a chair. To get an adrenaline rush you simply have to stand on top of it... I have to thank Fabio Erriu for having accompanied me to this beautiful place during the cold winter days while I rebolted these routes. When I reached the top for the first time a cold wind was blowing and the temperature had dropped to about 3°C. But it was great nevertheless...

Sinfonia del mulino bianco is a good-natured play on words and refers back to Sinfonia dei mulini a vento on the Aguglia of Goloritzé, the famous rock climb put up by Manolo and Gogna. The new climb is like the old one, in miniature. The Guglia dei Miracoli - the needle of miracles as we called it due to its proximity to the cave Grotta de su Miraculu - doesn't tower above the beautiful Cala Goloritzè beach but the atmosphere is something primeval, a true, beautiful lost world... It's rare to climb a needle like this, and even rarer to be the first. To do so today is a rare privilege...