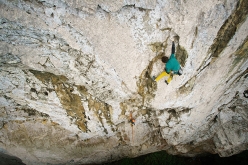 Gareth Leah during the first ascent of Nubivagant - Wandering in the clouds (455m, 5.13d/A0 8b,) up Pico Cão Grande on the island of São Tomé, Africa.
Photo by Matthew Parent / Adidas Outdoor 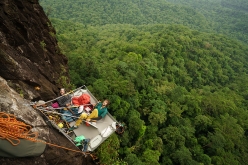 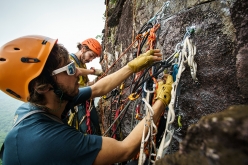 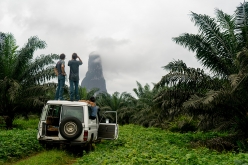 In June 2016 Sergio Almada Berreta and Gareth Leah made the first ascent of Nubivagant - Wandering in the clouds (455m, 5.13d/A0 8b) up Pico Cão Grande on the island of São Tomé, Africa.

In summer 2016 big wall specialists Sergio "Tiny" Almada from Mexico and England’s Gareth Leah travelled to the remote island of São Tomé off the western coast of Central Africa, where over a four-week period they established a difficult new bolt protected climb up Pico Cão Grande. This magnificent pillar stands almost 400m tall above the equatorial rainforest and was summited via their Nubivagant (Wandering in the clouds), a 455m line protected by bolts past difficulties up to 5.13d/A0 (F8b). The duo climbed everything clean, except for pitches 2, 3 and 4 as time ran out. The first route on the tower was climberd in October 1975 by a Portugese team including Jorge Trabulo Marques, while it is believed the summit was successfully reached for the first time by a small team of young Japanese climbers that included Kenichi Moriyama. Although at present it is unclear whether the new route is the second or third ascent of the peak, what is certain is that this latest jungle adventure really left its mark.

A dark tower of volcanic rock shrouded in clouds dominates the unearthly landscape. Formed millennia ago when high pressure magma solidified inside the vent of an active volcano, it’s presence is foreboding. This is the peak of Cão Grande, a 370m volcanic plug situated deep in the jungle on the island of São Tomé in sub-saharan Africa.

Prior to the expedition, I'd spent a year planning (mainly dreaming) of the day I would be able to visit this island whose landscapes resembled a scene from a Jurassic Park movie. It was a project I knew was ambitious on so many levels. Everything had to be carefully planned and arranged as the island offers almost nothing in the way of purchasable goods or medical help. If something was to go wrong, we would be on our own.

Arriving on the island was a cultural eye opener. Stray dogs running wild through the busy streets, a seven person family riding a single 125cc motorbike, a balancing act fit for a circus performance. Navigating the narrow roads that winded south from the capital we arrived at Agripalm plantation, the furthest point we could reach before being forced to continue on foot through the jungle.

A 3km hike through thick jungle and we emerged at the base of the wall, greeted unknowingly by a 100m high roof that jutted out some 30m. There was no information on the peaks rock formation prior to arrival and standing at the base we gained a very real sense of the task at hand.

Three weeks of 14 hour days later and we were stood on top of the peak. Reaching the summit had been wrought with difficulties that threatened to end the project from the start, many of them not climbing related. Luggage problems, blown battery chargers, generator issues, snake bites, jungle logistics, currency exchange, sickness and stuck vehicles all looked that they would stop us in achieving our goal. However, with each new obstacle that stood in our path, we would find a solution, though non were what you would describe as “traditional".

Having now completed the route and with time to reflect upon the island, the peak and the people we have encountered along the way. I am thankful in all that I have gained from the trip which amounts to a lot more than just a new route, but new friends, skills and an understanding of a life where people are masters of their environment.

Thanks to: Nite Ize, Mad Rock, Hanchor, Maxim Ropes, Voltaic Systems, DMM, Adventure Medical Kits, adidas Outdoors, Five Ten. The project was realised thanks to the help of the adidas Outdoor #claimfreedom campaign. You can follow the story as it unfolded by viewing the hashtag #bigwallintotheclouds

Nubivagant (Wandering in the clouds)