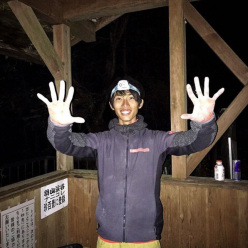 Japanese climber Sachi Amma, winner of the 2012 and 2013 Lead World Cup, completes his project of climbing ten 9a's or harder in 2015.
Photo by archive Sachi Amma

Japanese climber Sachi Amma has completed his aim of redpointing 10 sport climbs graded 9a or harder in 2015.

Mission accomplished. Sachi Amma has just achieved his goal of climbing ten routes 9a or harder by the end of 2015 by freeing a new route he bolted recently in Japan. The 10 x 9a or harder project kicked off in February this year, during a visit to Oliana in Spain where after redpointing the 9b of Fight or Flight something changed as he himself admitted. Amma’s quest for these difficulties has led him from Spain to Ceuse in France and back to Japan where he completed the ten climbs.

In the midst of all the winner of the Lead World Cup 2012 and 2013 also stopped off briefly in Switzerland where, at Magic Wood, he nailed the boulder problem New Baseline 8B+ third go before making a single day ascent of Never ending story 8B+, while at Cresciano he took down Confessions 8B.

In February we had predicted that had he continued at this pace, he would soon have to think of a new challenge. Unsurprisingly the 26-year-old has now raised the bar: no longer ten 9a’s, but ten 9a+ this year!