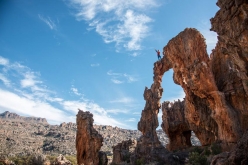 In 2014 France’s Caroline Ciavaldini and England’s James Pearson did something rather unusual: they travelled to South Africa not to discover Rocklands' bouldering potential, but what the area held in store for trad climbing. The two were so blown away by what they saw that they returned in 2015 to continue their exploration of this new trad climbing heaven south of Cederberg, that peaked with the first ascent of the stunning Bonnano Pisano up the Leaning Tower, a 50m E9 through a massive horrizontal roof.