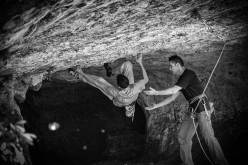 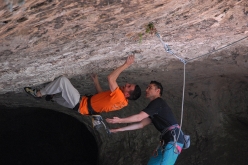 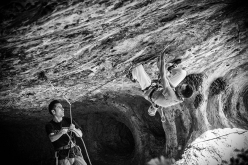 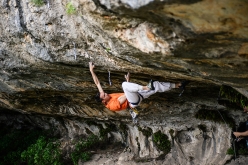 Sport climbing: the report by Mauro Dell'Antonia who last May at Lumignano (Italy) made the first ascent of ‘Rivoluzione’ . The 51-year-old Venetian climber has suggested 9a and, should this be confirmed, then this would make the climb the hardest at this historical crag.

So there we have it. Even Lumignano - the historic sports crag in Northern Italy - now boasts its first 9a thanks to local climber Mauro Dell'Antonia. The skill and perseverance of this ageless Venetian climber has now been amply rewarded, as has his love for a world - those fantastic limestone walls above Lumignano - that has lasted for more than thirty years. The new route is located in one of the least popular and, at the same time, most particular corners of Lumignano, namely the fantastic network of caves below the “Piardi" sector. In the past only Roberto Bressan had bolted a set of intense routes which emerged from the caves underbelly and finished on the beautiful Piardi balcony. No one, however, had ever thought about climbing across the cave’s long and low ceiling and then finishing up the the bombé above. Nobody except Dell’Antonia who, in the past, had already sent some extremely difficult problems in that cave. Only he had envisaged those problems. And only he had the foresight to see the new route which, if confirmed, gives this historic climbing area set in the Berici hillside its first 9a. Describing the route as difficult and particular is a euphemism, and a quick glance at the starting roof suffices. What’s more, as Dell’Antonia explains, the belaying is unique: the rope is clipped to the climber’s harness as he exits the roof… In short, the route is out of the ordinary and required imagination and passion to be invented as well as the consistency and strength to finally send it. “I didn’t feel satisfied," Dell'Antonia confided "but absolutely liberated!" Perhaps this is why he called it “Revolution"?

Whenever I passed through that cave, “my cave”, I always stopped for a few moments in mystical contemplation: I imagined one day managing to reach those two pockets so close to each other and then continuing up the unclimbed line... I kept examining that pocket and in the end that hole turned out to be the key for the final redpoint.

Initially I failed to link the boulder problem with those two pockets that marked the start of the route and this was the tough problem that somehow needed to be solved.

It all started a few years ago, almost by accident; a couple of friends and I climbed together, free from the usual stereotyped schemes, and somehow I managed to link the moves from the end of the boulder problem to the two pockets… they were extreme, but I managed to stick them nevertheless.

In the following months I assiduously tried the new route, that upper section only, and sent it in February 2015. As a result I decided to bolt the ceiling above the boulder problem.

I started attempting the linkup in December 2016, and was immediately faced by a problem that couldn’t be underestimated: there was no way I could start climbing tied to the rope. I’d need both a spotter and a belayer. The rope clipped to the first to quickdraws, reachable from the ground, needs to be clipped to the harness by the spotter when your body is past the edge of the cave; you risk falling dangerously down for a few meters, and there’s no chance of a spotter hiding your fall.

The third and fourth quickdraw are clipped at the same time after the crux, the third is clipped when you’ve already climbed past it and, should you fall at that point, the belay cannot make a mistake. He simply cannot.

I sent the route in May, many of my attempts from December to mid-March were in vain due to the cold. I always set off warm but after climbing for almost two minutes across the horizontal roof, my heart never managed to keep the blood flowing to the peripheral parts of my body, which meant that I reached the lip with completely numb fingers. Other attempts were wasted due to technical errors as a result of poor synchronization between the spotter and belayer, and resulted in ground falls (onto crash pads).

This is the line I have desired most intensely, the one I dedicated not only body and mind but something I’d describe as maniacal passion ... I always feared I’d never succeed, and spent months and months training specifically and failed on numerous occasions. In the end it all paid off. The name of the route, Rivoluzione, Revolution, dind’t come about by chance. It represents something New for this climbing area.

Given the intensity of the individual moves and the complexity of the sequences I suggest 9a.

I would like to thanks those who during the last few months have supported me, in particular: Stefano, Fabio, Frenko and Lucio for the photographs.

19.06.2014
Mai più colla 8c by Mauro Dell'Antonia at Rocca Pendice
On 1 June, Mauro Dell'Antonia, the talented climber from Venice, Italy, climbed 'Mai più colla' at Punta della Croce, Rocca Pendice (Euganean Hills, Padua, Italy) for the first time without the hold that snapped off a few years ago. The proposed grade is 8c. This brief and intense series of crimps was first ascended in 1989 by Leonardo Di Marino who, with this route, added a true gem to the Italian, and not only Italian, sport climbing palette.