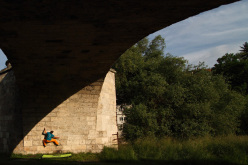 PORTFOLIO / gallery Portfolio: Pirmin Bertle and his 8B boulder at Fribourg

Pirmin Bertle and his 8B boulder at Fribourg

For those who started many years ago - before the advent of indoor walls - climbing on buildings is nothing new. Long traverses along the city walls (for example along the skating walls in Padua), up railway bridges, down old tunnels and also (for example at Finale Ligure) along the motorway bridges...

In short buildering, as it's been defined nowadays, has always existed (at the time without crashpads) and over the years it has lost none of its charm. Proof of this comes from the numerous street bouldering meetings and also Pirmin Bertle's latest creation. Not to mention, at the other edge of the extreme, the "clandestine" performances of Alain Robert up the world's most famous skyscrapers.

Well, Bertle has recently spent some time at Fribourg where he hunted out some old testpieces freed by Fred Nicole and then, beneath the Pont de Saint-Jean bridge, he freed Parmi les clochards. A 16 move traverse, graded 8B, completely natural (well, sort of!) and also the Canton's hardest boulder problem.