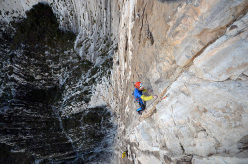 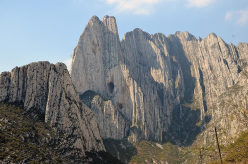 Rolando Larcher, Maurizio Oviglia and Luca Giupponi have made the first ascent of "El lobo del desierto", a new rock climb up the East and North Faces of Pico Pirineos, the massive towers above Monterrey in Mexico. Established over 5 days and freed by the Italians, the route is 12 pitches long (470m) and is graded 7c (5.12d). The big wall was climbed ground-up without using aid between one bolt and the next, despite requiring plenty of cleaning.

Given the current political situation, my regular traveling companions and I often say the safest place for a climbing trip is Latin America ... And so, after having discarded our initial plan of going to Oman, we focused on climbing in Chile. But Rolando Larcher had spoken to South American expert Simone Pedeferri and begun to consider Mexico since Simone had highly recommended it. After some quick research on the internet Rolando was drawn to a stunningly beautiful wall in Huasteca Canyon and, without knowing anything about it whatsoever, had explained to his sponsors that this would be the main goal of the trip. But, apart from Google, someone else we feel we have to thank is Paolo Marazzi who put us in touch with Alex Catlin, an American who lives in Mexico and is considered a true legend over there thanks to the routes he’s put up. Furthermore, Alex is also a great climber, having even repeated the 8c+ Macumba at Orgon in France. He now devotes most of his time to establishing single pitch sports climbs and lives with his wife Connie and their two children at Monterrey. Because, as Connie said, "it's much better than living in Texas."

After having been X-rayed and thoroughly searched at Miami airport, the rendezvous with Alex was at a Starbucks caffe in Monterrey: despite heavy espresso and croissant withdrawal symptoms, alleviated as best we could with muffins, we didn’t waste time and immediately set to work examining all (or almost all) the nearby rock faces to choose our objective. The temperatures plummeted by almost 30 degrees the next day and it even started snowing: we weren’t to be put off by so little and contained exploring the last canyons wrapped in our duvet jackets. But wasn’t Mexico considered a hot country? I’d even packed my swimsuit! After only two days of exploration we concluded that the face Rolando has seen on the internet wasn’t only the most beautiful, but also the most interesting, despite being not too far away from the city. It would be great to establish a new route on it, but had anything been climbed there before? No problem, Alex called Carlos, the local expert about Pico Independencia and its twin Pico Pirineos: from what we gathered picking up bits of their conversation in Spanish, it seemed as if the line we’d chosen was still virgin! Absolutely amazing, considering that people have been climbing here since the 60s and that this is the area with most mountaineering history in all of Mexico! We really didn’t want to cross any classic routes, so we needed to play things safe before being sorry!

We began the usual routine we’d become accustomed to during our previous expeditions: alarm clock in the middle of the night (breakfast - for me disgusting - was at a horrendous 24/7 Seven Eleven), followed by climbing from first light to eight in the evening, well past sunset. Then, exhausted, we’d dine in a restaurant (almost always the same one) in Monterrey to try and take in some proteins. There was no time for alcohol or nightlife, not even for some sight seeing or single pitch sport climbing, the name of the game was complete the main goal, we’d see to rest later. Is this perhaps why we’ve never returned from a trip empty-handed?

We adopted our usual style of climbing: strictly ground-up, splitting the pitches evenly between us (that’s why three is the perfect number), hanging off cliff-hooks only to place the next bolt, after having free climbed the section below. Even if the rock necessitated a fair bit of cleaning, meaning that we had to do deal with some fairly obligatory runouts! I've explained these things, taken for granted by many, clearly since when talking to Alex we realised that with sport climbs, or rather, with multi-pitches, Americans generally consider it normal to rappel from above or, if climbing ground-up, use removable bolts! For them, once you've decided to use bolts, it makes little difference what style you adopt! Just a few days ago an Anglo-Saxon climber wrote to me asking if it was possible to add bolts to some of my old routes established ground-up in Sicily! It’s amazing how the Anglo-Saxons can be so intransigent regarding trad routes but, at the same time, don’t recognize the mountaineering value of routes that are protected by bolts, even if forged ground-up!

After three days of hard work we’d put up just 5 pitches on the spectacular East Face, sometimes accompanied by with a pleasant breeze, while other times it was hellishly hot. Route cleaning cost a lot of time and energy but we wanted to create a beautiful and safe route, on a par with the others we’ve established elsewhere across the globe. So while one of us established a pitch, belayed by the other for stints up to 3 or 4 hours, the third jumared up and down cleaning the previous pitch. In order to clean the upper section of the route, without following with the easy arete (already breached by a classic route) we had to abseil 60m onto the opposite side of the mountain and continue up the north face, a nigh vertical 300m sheet of limestone. We decided to tackle this triangular face head on, i.e. straight through the middle, but due to the drastic drop in temperatures this resulted in two days of freezing! Mexico no way! It seemed as if we were in Patagonia! After a while we reached the brown section. We didn’t know what the rock quality would be like and from afar it resembled a howling wolf (hence the name of the climb). Luca Giupponi grit his teeth and, despite being frozen solid and just when he was about to give up, he summoned the energy to finish the pitch, a stone's throw from the top. This time he was the first to reach the "cumbre"! The welcoming sun warmed our numb limbs while we waited for Rolando to clean the final pitch.

Two days of rest were followed by the usual appointment with the redpoint first freee ascent, each climber dealing with the pitches they’d established. 7c was probably a mere formality for my two friends but for me, having spent half the year with a broken leg recovering at home, redpointing this pitch was a significant undertaking. As was the first pitch of the route, which I’d established, a 50m 7a+ with holds covered in dust due to pitches having been cleaned above. Given the length of the route we used up all our mental and physical reserves and when we summited we were pretty spent! After reaching the top for the second time we added the final touches to the line and abseiled off, following the beams of our head torches as usual. Mission accomplished in less than 15 days including a rest day! Which meant that we had another 6 days left. What now? I didn’t hide the fact that I hoped to climb at Potrero Chico or El Gigante, but my two climbing partners, tired of big walling in the cold, chose to pull on some crimps and tufas at the beautiful El Salto crag where Gippo (Luca Giupponi) on-sighted two 5.13b (8a). According to my partners, thanks to this cragging next time I’ll be a bit fitter and won’t complain asmuch as usual!

We would like to thank, first of all, Alex Catlin and his wife Connie for their hospitality. Then Simone Pedeferri and Paolo Marazzi for the information and contacts. And finally our sponsors La Sportiva, Petzl, Montura, Mammoth, E9, Totem Cams