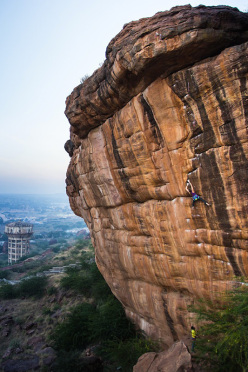 American climber Paige Claassen has repeated Ganesh 8b+ at Badami, the most difficult sport climb in India.

Paige Claassen's Lead Now Tour continues on a roll. After starting in South Africa with the 8b+ Digital Warfare at Wow Prow, and following this with the 8c Art Attack in Italy's Val di Mello and a further two 8c's at Yanghsuo in China, the American climber now checks in with a repeat of Ganesh, the 8b+ freed by Frenchman Gérôme Pouvreau at Badami and considered the hardest sport climb in India. Claassen redpointed the route after 5 days of efforts, many of which began at dawn to flee the oppressive heat. Her redpoint takes on a special meaning: it was seeing the video of this climb years ago that inspired her begin her tour

As Claassen explains "Ganesh would become the inspiration behind Lead Now. I wanted to climb some of the most obscure, beautiful sport lines in the world, in locations that would force me to learn about myself, about the world, and about the people in it. What better place than India? I knew there was more than Bollywood colors behind the deep, dark, beautiful eyes of the women who graced the pages of National Geographic each month."


- All the secrets of a super climber: interview with Paige Claassen

Lead Now Tour
This 12-month climbing journey serves a dual purpose: to climb to the max and use climbing as a vehicle to raises money to enable women and children in need.