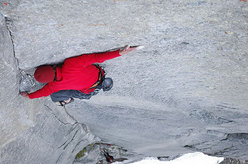 Hansjörg Auer on the balancy crux
Photo by Marten Blixt 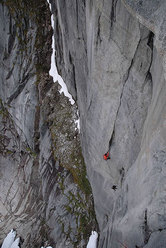 On the third pitch of Arctandria 8b, Norway
Photo by Marten Blixt 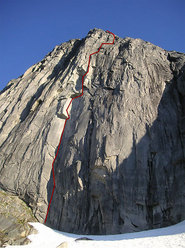 PORTFOLIO / gallery Portfolio: One day ascent of Arctandria on Blamannen for Haid and Auer

One day ascent of Arctandria on Blamannen for Haid and Auer

On 15 July the Austrians Markus Haid and Hansjörg Auer carried out the first one day ascent of "Arctandria" (8b) on Blamann Wall, Norway.

After four days inspection the Austrians Markus Haid and HansjÃ¶rg Auer carried out the first one day redpoint ascent of the trad route "Arctandria" (8b) on Blamannen, Norway. This 450m line follows a series of cracks up the north face of the massive granite monolith Blamannen and was first ascended in 1981, then freed in 2005 by the Swiss duo Didier Berthod and Giovanni Quirici, who climbed some pitches pinkpoint and did not climb the entire line in a single day.

Seeing that this is one of the hardest trad multi-pitches in Europe, we decided to get the low-down directly from the man himself, 23 year old HansjÃ¶rg Auer who in April surprised all with his solo ascent of Via attraverso il Pesce in Marmolada, Dolomites. Here's his report:


Arctandriaby HansjÃ¶rg Auer
"We set off with circa 80 kg of gear for our camp, located beautifully close to a lake. this indescribable corner of nature will become our home for the next 10 days and we won't meet a single soul. But both of us know that it won't be easy to carry out the first redpoint in a day of Arctandria.

Our idea of how to climb the route is severe. We want to check out the line and above all the first hard pitches at the start, then we want to climb the whole route as a team. Furthermore we want to place all pro during the ascent, we don't want to use jumars and neither the leader nor the second can ever fall during the ascent. So our climb is to be ethically completely clean. By no means an easy task, and above all something difficult psychologically... for both of us D day has to be exactly right.

15 July turns out to be the day. After 4 days checking out the route, interrupted frequently by bad weather, and after having lost plenty of skin on the route we reach the summit at 21.00. We hug each other and find it hard to believe what we've just done. Sharing this joy is particularly beautiful."

The route
Arctandria is located on the North Face of Blamannen on the island Kvaloya in Norway. 450m long, it follows a series of cracks almost all the way to the top.
There are no bolts, just some old in-situ pegs at some of the belays. The pitches are graded as follows: 7b+, 8b, 7c, 8a, 7b, 7c+, 7b, 7a, 6b+ and 6c+. All pitches need to be protected with trad gear. Thanks to the combination of technical difficulties and alpine protection this route can be considered on the hardest of its type in Europe.

Blamannen
Blamannen is located close to idyllic town and island Tromsoe, which can be reached easily by plane. This "small" bigwall is located on the Kvaloya island and is a paradise for mountaineering, sports climbing and bouldering. All info to this area can be found in the new guidebook.

Chronology1981:
the Norwegians Sjur and Havard Nesheim and the Finn Daeli climbed a line up the central, steepest section of Blamannen. Their route "Arctandria" heralded a new dimension in Scandinavian mountaineering. For many years "Arctandria" remained the hardest aid route in Norway.

Up to 2004:
Numerous attempts at freeing the route at the hands of local climbers.

2005:
The granite monolith gains international attention when a Swiss team comprised of Didier Berthod and Giovanni Qurici free all pitches at 8a+. The two do not redpoint the route in a single day.

2007:
On 15 July Markus Haid and HansjÃ¶rg Auer carry out the first redpoint in a single day. They do not use jumars nor in-situ gear, and need 9 hours to climb to the top. Both climb the route free. The route is upgraded to 8b.