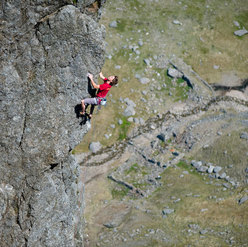 High on The Axe (E4 6b), Cloggy. www.alexmessenger.co.uk
Photo by Alex Messenger 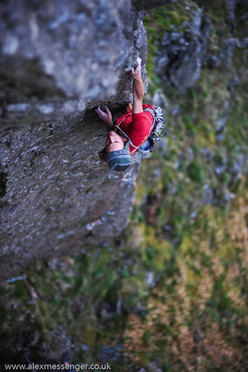 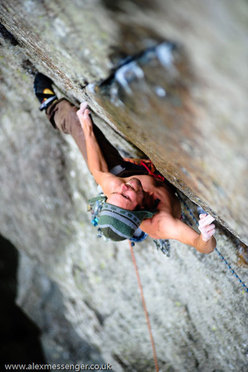 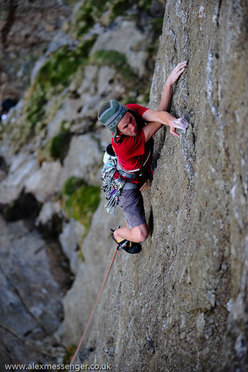 In mid-March the Belgians Nicolas Favresse and Sean Villanueva spent a prolific period in Wales as guests of the BMC annual International Meeting. Teamed with local climbers, the two unsurprisingly got to grips with some of the biggest and most famous lines in Wales, on-sighting E6 regularly and even pushing the boat out to on-sight John Redhead's Cloggy masterpiece “Authentic desire” E7 6b.

The duo obviously enjoyed the trad approach so much that after the meeting they spent another two weeks in the area to gain further insight into the delights of the local climbing, amassing an enviable list of ascents published below.

Favresse needs little introduction. His sports climbing ascents up to 8c+ speak louder than words, and his curriculum on big walls in Yosemite, Patagonia and Pakistan make him one of the world's most impressive all-rounders. Bearing this in mind, his analysis of this brief three-week stint is all the more thought-provoking: “climbing the UK opened my eyes to new territory. There is so much to learn from the climbing there!”

Eager to find out more, we asked Nico to share with us his extensive thoughts about his British trad experience. Something leads us to believe there's more to come in the future…


Nico - tell us about your first trip to Wales and England?
Climbing in the UK has always been on my list of things to do because it seemed like a place to learn new things, no matter how accomplished a climber you are. And after this trip I can confirm this! During my 3 week trip I only clipped bolts twice! The rest of the time we just did trad ground-up on-sight, as this seemed like the best way to learn about this new territory and this most natural approach. Interestingly, we climbed many routes that I previously would have thought impossible to protect using trad gear. From my three week experience I learnt that trad climbing in the UK can be very adventurous, not only because of some awkward pro but also because of loose rock that can be "fun" to climb, at least, that is according to the Brits! In sports climbing the focus is on the physical difficulty, but here it seems as if each climb has its own very special character and unique famous story. Grades are also important of course, but it's the stories which make the routes famous, way more than their actual grades!

What were your impressions about the variety of climbing in Wales? Slate, Gogarth, Cloggy, Dinas Cromlech all within a stone's throw of each other.
All this places are really nice because they provide totally unique styles of climbing. As you said these places are concentrated in a very small area, which means that you can climb at a different crag every day. I think I liked Gogarth the best because of its location next to the ocean. While you climb you can even see seals and dolphins, and on nice days it feels like climbing on the coast of Sardinia! All the other areas are also super good! We also travelled to the Peak District was also very interesting and really challenging.

What about the climbing history?
I feel that much of the UK's rich climbing history is practically unheard of on the continent. Through the routes I tried I learnt about the impressive stories of the first ascentsionists. I had never heard of the likes of Ron Fawcett, Joe Brown, Pat Littlejohn, John Redhead... These people are highly respected in the UK and now after trying some of their routes and after hearing some stories I really respect them as well! Their strong ethics pushed them to the point of exposing their life for the purity of their climbs!

Recently you've been climbing more trad than sport.
I love sport climbing but I love trad even more. Finding a good trad line where I can push my limit physically and mentally is what I love best. I know I haven't invented anything new, but it really does feel more complete and it makes me feel even better to be able to climb something leaving the rock in its original state. It's pure!
Plus trad routes are usually unique and striking lines. They give me much stronger memories but they are usually hard to find and sometimes fairly remote, so you can't be too greedy!

During your trip you on-sighted up to E7 which is astounding. What would you need to on-sight E8?
I guess just getting on the right route at the right moment. The E rating is so broad that E8 could be many different things, from a scary solo to a hard "safe" climb. On-sighting on these different styles of climbing has lots of variations or different meanings to different people. Having a route cleaned with chalk, knowing the gear, knowing where the crux is and where it's scary - these are all things that make a huge difference on a trad on-sight. Much more than on a sport climb. Plus the hard routes aren't often repeated so many E8's are dirty and can easily feel more like E9 or E10. Sometimes the in-situ pro (if they is some) is rotten so when you're on the on-sight you aren't sure if it's going to hold because you can't test them. Sometimes pitons are so old that they break when you clip them! So apart from the grade, here you really have to know your personal limits intimately. My goal during this trip was to explore the different styles of climbing as much as possible instead of making a super performance with an E8 on-sight.

Talking about E8 on-sights - you took a whipper down Nightmare on Dinas Cromlech…
Yes, it was my first day climbing in the UK. I was still virgin to this type of climbing so still a bit ignorant! The famous old school local climber Pat Littlejohn was climbing next to us and had seen me looking easy on climbs. Nightmare E8 6c was a good looking line so I decided to try it. I mentioned to Sean that I would first try it on toprope but Pat said to Sean: "If there is somebody here who is able to give a good try ground up it's him." When Sean told me this I thought it would be good to follow this wise local climber's suggestion. The route was completely dirty so Sean first went up to clean the route a bit and look at the gear. The climbing was really nice with a style of climbing that I like particularly, crimpy and dead vertical. But the climb was still very dirty with poor gear on the first part of the climb. After a few good pieces of pro midway up the wall the crux arrived at the upper section. While searching for other pro I got too pumped to keep on climbing and so I fell. The piece I thought would hold didn't, it ripped out and so I unexpectedly fell a long way down the wall. 3 pieces ripped and I was stopped upside down about 20 meters below by a good wire. Afterwards people talked about this fall a lot, even though for me it was just an unsuccessful try.

You're relatively new to the trad game and the fall could have been much more serious. Could it be that due to your sports climbing fitness you're dangerously pushing your limit?
I feel like I still have lot's to learn in trad climbing but my sport climbing skills allows me to be slow so that's a good advantage. I am not so interested in pushing my limits on dangerous routes but I do like the idea of learning how to free my body and mind even in very exposed situations.

Last million dollar question: what sets a route apart from the rest?
Its line, moves, rock quality, exposure, unique characteristics and location. And of course, if its trad!

Slate
The Rainbow of Recalcitrance E6 6b (first pitch)
The Quarryman E8 7a (first pitch only, Sean flash, Nico redpoint)