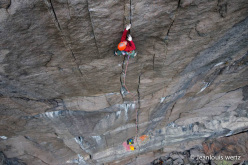 Nicolas Favresse on his route The recovery drink located on the Profile wall at Jossingfjord, Norway.
Photo by Jean-Louis Wertz 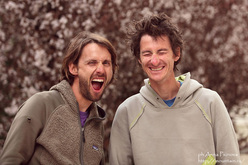 On 22 May 2013 Belgian rock climber Nicolas Favresse freed his project in Norway, The recovery drink on Profile wall at Jossingfjord.

Last Wednesday Nicolas Favresse freed the project we'd presented last January as "the perfect crack". We're talking about that 35m line up the Profile wall at Jossingfjord on the southern tip of Norway that Favresse had attempted last summer with a group of friends before being forced to return home empty handed due to a combination of extreme difficulties and poor weather. Favresse returned this spring with Stephane Hanssens and even if the Belgian climber doesn't provide a grade, we're certain that the following description suffices "It's certainly one of the coolest lines I have ever climbed and the hardest crack I have ever redpointed!"


THE RECOVERY DRINK IN NORWAY by Nicolas Favresse

"I finally sent my long-term king line crack project in Norway last Wednesday! Now I feel so happy and complete;) It's certainly one of the coolest lines I have ever climbed and the hardest crack I have ever redpointed!

Daniel Jung, my brother Olivier, Bernardo Gimenez and I first found the line last summer while on a crack hunting crusade. Erik Massih, a very active Swedish trad climber in both Sweden and Norway, told us about a overhanging wall with cracks we should check out. And so we did.

When we got there our attention was immediately caught by a very impressive series of splitter cracks up the middle of the overhang. Even though it looked way too futuristic we were so motivated we decided to waste no time and check it out right away. In fact, it's the very first line we got on in Norway and we immediately found what we were looking for: a perfect crack project that would keep us busy for a while. We spent the rest of the trip trying it over and over again, learning how to solve each move, making really unique sequences of thin fingers locks, drop knees and rail slapping moves. After three weeks trying it and fighting against difficult weather conditions our fingers got completely trashed by the sharp cracks and we were forced to leave it, unfinished.

I had to wait for spring to return to give it another try, this time with my friend Stephane Hanssens who was psyched to join me. The weather remained as difficult as before, with lots of rain, strong winds and cold temperatures. It took me another two weeks to finally complete it. It was an amazing feeling!

I sent the pitch placing gear on lead except for a few pieces in the easier sections which I had left in place to make it easier to clean the route after each try, because it's very overhanging. So a slightly purer ascent could still be done. The pitch is about 35m long and has no bolts, neither on the route itself nor at the belays. It consists of three distinct sections split by rests. The middle section is the hardest and the last section is very pumpy with a heartbreaking move right at the end. I was glad not to fall there on the linkage...

I chose to call it "The recovery drink" which fortunately we had imported plenty enough! It's located on a face called Profile wall in Jossingfjord, on the very southern tip of Norway. There are still some really good-looking overhanging splitter cracks waiting to be freed.

Now I'm just riding the happy sending vibes and driving away from Norway towards the Alps to train for my future expedition in Pakistan this summer.