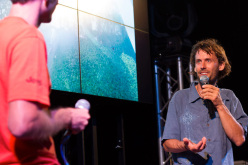 Nico Favresse and the perfect crack climb in Norway

The words and video of Nicolas Favresse about his latest project, a beautiful and difficult trad climb in Norway.

The news dates back to last summer but since the route deserves the attention, we thought we'd share it: we're talking about the latest Nico Favresse project, discovered and attempted together with his brother Oliver and Daniel Jung in Norway. Unfortunately to no avail due to terrible weather and the extreme difficulties of this beautiful trad route.

Nico described the line to us as follows: "The route is located on a wall which is circa 150m high. You can access the hard pitch from a ledge system but below there is a 7c+ trad introduction pitch and above there are probably two other hard pitches which I haven't even explored yet. The pitch I've been working on is amazing! A true "King line" and very hard, long, overhanging and, at least so far, all on natural removal protection including the belays. After working the route for 2 weeks last summer I fell right at the end of the hard section. Since I didn't have much time for the redpoint and I was so excited I only tried this one route, and my fingers quickly got completely trashed. I had to tape them more and more and I even began to lose the feeling of the crack. In the end it was a bit epic, but the most difficult thing of all was to say goodbye to this incredible project as I got so painfully close to doing it! But now I'm so psyched to go back and try to redpoint this pitch and maybe the whole wall. It's certainly a masterpiece of trad climbing!"