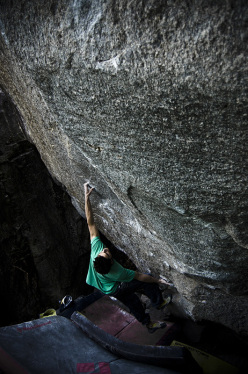 Having recovered from a 2014 injury, the boulderer Niccolò Ceria has now repeated Ninja Skills 8B+ at Sobrio and Big Kat 8B+ at Chironico, both in Switzerland’s Ticino and the latter is perhaps his hardest problem so far.

"After my wrist injury last May, I’m slowly getting back in shape and on problems that suit my style and I’m almost back to my previous form. I spent 2/3 of December training, never climbing outdoors, but during the last fortnight I’ve spent a couple of days in Ticino, since it’s fairly close to home and has plenty of great quality boulder problems. I had several lines in mind and wanted to find some I could work over a couple of days, thereby avoiding my usual bad approach of trying something once and then coming back months later.

The first problem I tried was Ninja Skills, one of the best in Ticino I believe, put up by Nalle Hukkataival 5 or 6 years ago. The approach is quite long and this is perhaps the only negative aspect, but this long walk is rewarded by precious tranquility, far removed from the usual hustle and bustle in more famous areas. I worked the line for two full days. The first in January 2011, when I only managed the individual moves on the second half, as the first moves felt decidedly out of reach. I returned in December and after a few attempts I fell off the last hard last move. During the day I discovered some easier beta and managed to send it that day!

After Ninja, I turned my attention to Big Kat, a line put up by Jimmy Webb at Chironico that's challenging for me, more mentally than physically. In fact, after a long sequence of 18/20 pumpy movements there's a mantle to get established above, rellay difficult and somewhat scary and intimidating. This is why I had to reach the final section competely fresh, for althougth it's no longer as burley, my lack of technique at doing rockovers meant that this was one of the hardest moves of all. After three days of intense efforts, on the fourth day I managed to stick it and avoid the agony I felt every time on those damn finishing moves."