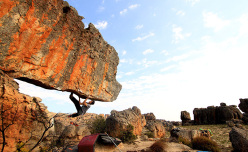 The Rhino 7B Rocklands, South Africa.
Photo by Nils Favre 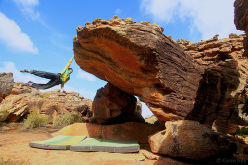 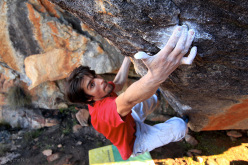 The power of one 8B Rocklands, South Africa.
Photo by Nils Favre

PORTFOLIO / gallery Portfolio: Niccolò Ceria and the bouldering at Rocklands

Niccolò Ceria and the bouldering at Rocklands

The report by Niccolò Ceria and his five-week bouldering trip to Rocklands, South Africa, which culminated with the repeat of Golden Shadow 8B+.

I've been wanting to go climbing in South Africa for years, everyone said it was a real paradise but in the past organising a trip there wasn't easy, partly because I was still under-aged and partly because I had difficulty in finding a group of people to go with. My wait ended this spring when Nils Favre invited me to Rocklands with a group of his friends. After thinking about it for a couple of days I decided to grab this opportunity and booked a 5-week ticket.

Knowing that I was going to go to South Africa really motivated me and I spent 10 weeks training in May and June of training, trying to work on the particular style of climbing and prepare myself for those boulders. I was really taken in by some lines I'd seen on video and wanted to get there on form to send those problems I'd dreamt about for ages.

What I saw lived up to my expectations and I was left dazzled and speechless by some problems. Those that impressed me most were "El corazon", which is like a big orange heart, tall and imposing with exceptional moves, "Sky", another plum lines with beautiful moves, and "Black eagle" a black boulder with some crazy holds, carefully balanced on a slab of rock with the beautiful Rocklands landscape as a backdrop. Unfortunately I failed to send this. Other fantastic problems included "Caroline", "Moiste mooise" and "Sitting in a corner with depression".

The quality of the climbing is obviously superb, although I believe that the better problems are all medium-high difficulty; unfortunately the easier problems weren't as beautiful as they are in other places. As to the actual rock, the best is located in "The Pass" area, while elsewhere it's good but not as exceptional as I had thought.

The best thing about Rocklands is certainly the surrounding countryside, the fact that you can climb in the middle of nature and not be disturbed by anything else. bearing this in mind I think it's one of the most beautiful places I've seen so far, the colors are wonderful and the nature is beautiful, with blue skies contrasting with the orange and black boulders.

Many problems I sent were as satisfying as I had hoped, thanks to the moves and the beauty of the boulders. I'll return one day, to climb in this fabulous setting and to try some of the problems I failed to send.