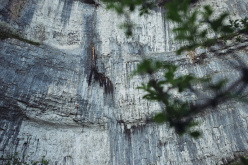 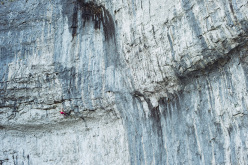 Just like Mecca, Bat Route is another classic British test-piece that dates back to same era and was first ascended by one of the country’s elite climbers, Mark Leach. Bat Route tackles the crag’s bouldery central bulge and Leach freed the line in 1989, a year after his determined, 46-day redpoint of the adjacent 8c Cry Freedom.

Leslie-Wujastyk made the first female ascent of Bat Route on 29 May on the 4th redpoint attempt of the day, at nine o-clock in the evening, and this comes after her repeat of Austrian Oak (8b) earlier this month. For the record, Bat Route was the scene of Britain’s first 8c onsight, at the hands of Adam Ondra in 2011.