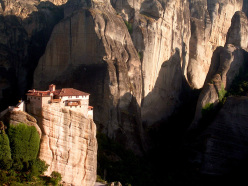 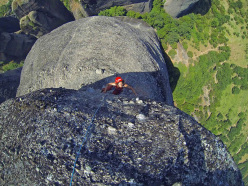 Meteora climbing at risk in Greece

A petition launched by the Committee of Meteora Climbers against banning climbing at these famous towers in Thessalia, Greece. The report by George Voutiropoulos.

Climbing at Meteora in Greece may be at risk due to government plans to restrict access to these unique conglomerate towers. George Voutiropoulos, mountain guide, local climber and member of the Meteora Climbers committee, has launched a petition and explains about recent developments which see climbers’ interests in contrast with those of the local monks.

CLIMBING AT RISK AT METEORA
by George Voutiropoulos

The problem dates back to 1995 when, under pressure from the ecclesiastic lobby, the central government passed a legislation that declared the area a "sacred place". This gave monasteries a certain degree of power to compete against the local authorities and municipality over land control, which until now has resulted only in demands of ownership. Since the wording in this first legislation was generalized, this didn’t actually affect climbing on the cliffs themselves, leaving future legislations to define and control the activities in the inner area of this sacred place. Despite having received World Heritage status in 1988, Meteora is still open to climbers, except those six towers with active monasteries on top, where climbing is strictly forbidden ever since the 1970s.

Last year a plan to restrict access to Meteora was made by the local archaeological bureau which recognized climbing (and other activities such as base jumping, highlining, etc) as an offense to monastic life and a threat to the environment. The original plan suggested limited access to rocks which had no view onto the monasteries and which also don't have any remains of ancient activity on them, resulting in restricted access to almost 3/4 of the climbable cliffs. Local climbers, associations and the Hellenic federation of climbing and mountaineering appealed, but to little avail.

Due to the planned Petzl Rocktrip we recently discovered, much to our surprise, that the government is almost ready to pass a law restricting activities in Meteora, meaning that the local authorities were unable to support the event. Strangely, we do not have access to the forthcoming law and we do not know when it might be passed.

We have attempted to activate the Greek climbing community, to seek publicity in favor of climbing at Meteora and demonstrate a strong national and international interest via our petition. Access problems are something new to us, managing this situation is difficult and any help from community would be helpful.

Please sign our petition and help us keep climbing at Meteora alive!