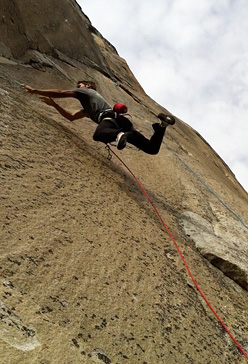 We last reported from Tommy Caldwell and Kevin Jorgeson in March when they were working on the immensely difficult Mescalito Dawn Wall project on El Capitan in Yosemite. The summer set in before the two managed to free all the pitches of this massive big wall and now, with cooler autumn temperatures, they are back and climbing predominantly in the dark.

The two Americans have now abseiled in from the summit and established basecamp - a portaledge - on Wino Tower, from where they abseil to work the crux pitches lower down. What makes their current attempts interesting is that the duo are climbing predominantly in the dark, from 5pm to 1am, for optimal conditions seeing that the wall comes into the shade in the late afternoon.

Jorgeson explained on his blog: "We'll eat a big dinner and rappel off Wino Tower to work on the 4 pitches below us (pitch 16: 5.14, pitch 17: 5.13c, pitch 18: 5.13c or d and pitch 19: 5.13c). Climbing at night has worked out great. It's quiet, cool, and time seems to stand still. Hours will pass in the solitude of your headlamp and thoughts before arriving back at Wino Tower sometime in the middle of the night."

Tactics like these may well mark the difference between success and failure and resemble Himalayan mountaineering, where summit pushes are started in the earliest hours of day. And also resemble that ground-breaking ascent way back in 1994, when an amazing one-day free ascent up the most famous big wall in the world kicked off in the dying hours of the day: "On September 19 at ten P.M., we started up the route again. This time, everything seemed to flow together smoothly. Throughout the peaceful hours of the night, illuminated by the radiance of the full moon, I climbed pitch after pitch." No prizes for guessing who, and on what route.

Check out this intro to the Mescalito project on El Capitan.