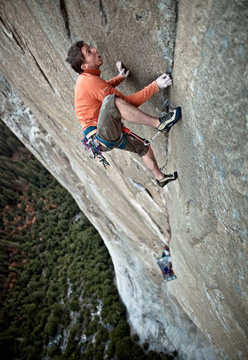 Tommy Caldwell and Kevin Jorgeson are currently attempting to free their Mescalito Dawn Wall project on El Capitan in Yosemite.

This is it. As you read these words, Tommy Caldwell and Kevin Jorgeson are at circa a third of the way up the definitive push on their mammoth Mescalito project up the Dawn Wall on the right-hand side of El Capitan in Yosemite.

The two nervously set off on Saturday 13 November and managed to send the first 6 of the 30 pitches. Falling slightly behind their ideal schedule, on day 2 they struggled hard but managed to get to grips with pitches 7 and 8, while day 3 was generally a rest day but in cooler dusk temperatures they sneaked in pitch 9.

This means the duo is now poised for the main difficulties and as Jorgeson wrote prior to setting off "After day two and the completion of pitch 10 (which is a monster), we will likely be spending one day for each pitch thereafter with rest days mixed in. Pitches 12, 13, 14, and 15 are all 5.14, and solid at that. This effort is the culmination of roughly 65 days of work over three season."

While Jorgeson is a relative newcomer to big walls (and better known for his powerful and audacious bouldering and headpoints), Caldwell is one of the most successful Yosemite climbers of the last decade, with first free ascent such as the West Buttress (5.13c, 2003), Dihedral Wall (5.14a, 2004), Magic Mushroom (5.14a, 2008) as well as repeats of Salathé as well as The Nose and Freerider in a day.

The latest climb is being hailed by many as one of the biggest undertakings on El Capitan ever since Lynn Hill freed the Nose in 1993 and then climbed it in a single day a year later. While the two may be practically alone on the wall in late-November 2010 they can rest assured that, thanks to modern twitter and blog updates, the eyes of the climbing world are constantly on them!