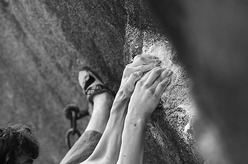 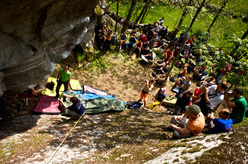 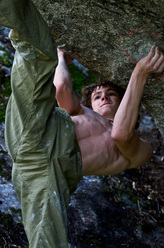 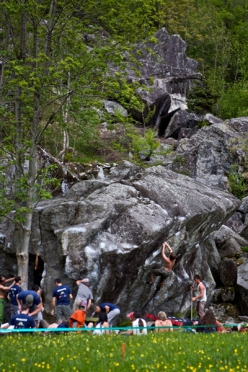 Melloblocco #6 and the treasure map

The sixth Melloblocco 2009, the world's most important bouldering meeting, broke all records from 07 - 10 May 2009. At least 2500-3000 climbers gathered in Val Masino and Val di Mello and more than 6000 people visited the valley for this happening which embodies the joy of bouldering.

This is the last time. But in the end I always give in, I'm not too sure why to be honest. For five years I've aways been certain that I'd no longer return to the Melloblocco. What else can be said? I think. And what else can be seen that hasn't already been seen? I say to myself. Yet even with this sixth Melloblocco I can state, with the usual smile half way between feeling stupid and stunned: "I was there!" Yes, once again Val di Mello sucked me in. And, once again, I saw things that you who weren't there cannot even imagine.

I saw the valley filled to the brim again with a thousand colours of the boulder tribe. And I saw the eyes of the many, many youngsters, young and even younger, fill up with dreams once more. I revisited those rock faces which always seem to hypnotise me. And I caressed those boulders... (how many are there?) which seem to have got here from nowhere. Are they maybe asteroids precipitated from another planet? And all these melloblockers, are they not perhaps Martians? Where do they all come from? I've never seen so many! They seem to belong to a different universe. Even if, I suspect, they come from just around the corner. Behind every rock in the world. If I think about it then in "normal" life they are always there. All Melloblocco does is help you see them. Just like it helps you re-see and re-hear the simple things in life. Like that silence made of whispers and emotions which intertwine endlessly behind every hold, at every rock totem, at every glance.

I'm recounting a fairy tale, I know. Melloblocco evidently doesn't do me any good, this is certain. But try to imagine seeing a youngster, with an air of being both lost and blessed, suddenly appear on the path which winds its way through the boulders. Try to imagine a long and ordered file of other climbers (of all ages) following his every step. Well, wouldn't you have thought you'd just stumbled across the pied piper? Adam, the piper, was looking for his new "problem" and all the others were perhaps searching for who knows what kind of magic. Who knows why, but the fact of the matter is that I too joined the group.

The tricks really did happen and what Adam did on that impossible boulder, then on the next, was true magic. And it was magical to experience the joy, almost at the same time as Adam's abracadabra, of another melloblocker who a mere 10 meters away carried out his small great trick. The happiness of these two climbers didn't seem all to different. If this is possible, that of the nameless piper seemed even greater and more beautiful. Well well well, I thought to myself, these are the usual Melloblocco hallucinations.

The music prepared by the "Shamano" for Iris' lawn - the enchanting garden in the Mountain Center - was a trip in its own right. The music was ancient Neil Young and the sensation was that of a timeless journey through time itself. Then there was that row of sleeping bags beneath the boulder in the garden which, only hours earlier, had made me smile. There are things which are truly timeless I said to myself. They are the most simple things in life, perhaps they are the ones that remain. Like that sane madness of the climbers who at midnight were still at it, armed with headtorches, attempting to unlock the secret to climbing the thousand year old boulder.

I saw all of this and more at the Melloblocco. Like that girl with a Roman-Sicilian accent, yet of German origin, who complained about the heat and the slippery holds. But then she stayed put for an entire afternoon to solve her boulder problem. In the evening she showed her skin, trashed like never before, her eyes sparkling happily like those of a young girl. Hers was was the very same smile of a truly uncountable number of melloblockers who, with hands and fingers marked by too much rock, continued undeterred in search of other caresses.

A collective strength of the Melloblocco was in the air, almost palpable. A "not sure exactly what it is", which perhaps has to do with love. Yes, perhaps here in the valley, hidden between the thousands of granite crystals, there is something which is worth searching for. Perhaps this is the true secret of the Melloblocco. Even if I suspect I'm the only one who hasn't found it yet. Perhaps this is why I still haven't understood the magnificent treasure map prepared by Simone once again for all the melloblockers. I continue to get pleasantly lost in that map... and, oh dear, I'm certain I'll get lost next year too. Sweetly, never ending.


Melloblocco 2009 Success
In the valley: more than 6000 people
Officially registered: 2100