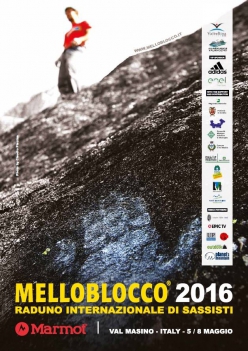 Melloblocco 2016, the world's biggest climbing and bouldering meeting will take place from 5 to 8 May 2016 in Val Masino - Val di Mello, Italy
Photo by Melloblocco / Claudio Piscina 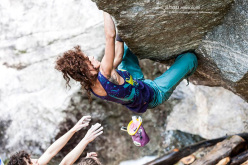 For those who are lost in climbing or want to get lost climbing, the date is set from 5 to 8 May in Val Masino - Val di Mello, Italy, for the world’s most famous international bouldering meeting, Melloblocco 2016.

Don’t follow me, I'm lost. I’m off to Melloblocco and I know I'll get lost. For the umpteenth time, my thirteenth, I’m going to get lost. The bouldering treasure map will be of no use whatsoever. Not even the beers served by Iris will enlighten me. Even if some - the usual three Mello suspects - insist it's all easy. Which it is nice, and healthy too. Nevertheless, I’ll continue to fail to understand. That Valley sky. Its rocks. Those boulders hidden in the woods. Those problems that everyone climbs. All those smiles. Why so many so stubbornly insist in taking part. In returning. In coming for the first time. In short, don’t follow me. Don’t follow them. You too will risk getting lost. Will risk unearthing more questions and problems you’d ever imagined. And you’ll risk meeting and getting to know all those climbers who come from just about everywhere. From Turkey. France. Spain. Germany. Austria. Switzerland. From everywhere. Within Italy they travel from Sicily, South Tyrol, Valle d'Aosta and from who knows where. Once I met one someone from Australia... And then there’s also the crew from Brescia, a disreputable lot. Watch out and don’t be lured: they claim to be climbers, but they always end up making mayhem.

Not to speak of those who never stop climbing. Because they’ve always got a boulder problem that needs to be sent. Found. Attempted. Solved. Even at night, with a head torch. Perhaps they’ll infect you. Perhaps you’ll end up with "trashed" skin after having crimped too much rock. Mello hurts, so much you’ll get an indigestion from all that stone. And then, of course, you’ll also have to walk. It seems as if in recent times it’s become fashionable to leave the cars in the car park. Madness. All those people - of all ages - walking, even for half an hour! Just to go to bouldering with those mattresses (they call them crash-pads) slung over their shoulders. Ecological madness. An oddity, acutally. To say nothing of those who suggest you to take the test to see if you are a potential bone marrow donor. Or he (doctor Kelios) who provides scientific tips to stop you from devastating your tendons and what not as you pull on tiny crimps and a whole range of holds. Or those from whom it’s never late. Is never enough. Those who, once they take their hands off the rock, latch on to any game that defies gravity. Those who don’t miss a chance to dance. Those always searching for something, to watch a climbing film. To discuss climbing. And also to celebrate with climbing.

Not to mention the fact that you risk climbing, or dancing, alongside some famous male climbers, or, even better, famous female climbers, those who adorn the front cover of magazines. Or that you might be seduced by encounters, such as meeting Simone Pedeferri who, over a beer, will talk to you about slopers and... Schopenhauer. I could go on for much, much longer. But you see (my dear ones): if you haven’t understood already, it’s difficult to put into words. So, if you really cannot do without, if you fail to resists… that’s your business. You certainly won’t understand, but you certainly will climb. And how!

MELLOBLOCCO 2016 - instructions for use:
Pre-registration
Program