► News ► Climbing ► Melloblocco 2010 according to Adam Ondra and Nico Favresse... 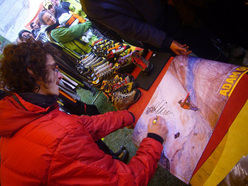 Melloblocco 2010 according to Adam Ondra and Nico Favresse...

Two excellent Melloblockers share their impressions about Melloblocco 2010: Nico Favresse who visited the Val di Mello for the first time and Adam Ondra who won the special "Mello" boulders for the third year running.

Adam, what did you think about Melloblocco 2010?
It's the same as every year. As good as the previous year. Plenty of people, loads of crashpads, many spotters, everyone sharing beta... It's great.

So Melloblocco is...
Adam: Thousands of people who aren't worried about ruining their skin that gather together in a beautiful alpine valley to climb on stunning boulders. It's a good opportunity for everybody to get some good bouldering done, to watch the best climbers fight the competition problems and to have fun with others.

Nico how would you describe Val di Mello to someone who hasn't ever seen it before?
It was actually the first time I went into Val di Mello. I would agree with those who say it’s our piccolo European version of Yosemite. Except there are no cars, no police and fewer tourists. It’s also surrounded by big mountains with glaciers and waterfalls. I can only imagine what a paradise it would be when basked in sunshine. And for climbers the possibilities seem huge. I'll definitely have to go back.

What were your impressions of the Melloblocco tribe
Adam: The people are relaxed, everybody enjoys their time there. They all encourage each other. You can easily recognise the Melloblocco tribe - they keep looking at their fingers in pain.
Nico: I just couldn’t believe how many people showed up. Even if the weather was far from perfect, people went climbing and basically on every piece of rock in the valley seemed to be occupied by at least a couple climbers. The atmosphere was really good... More of a big party than a serious competition.  And the climbing is absolutely awesome. Some of the boulders are really outstanding with really good lines, good rock and interesting moves.

Nico, we heard you climbed Luna Nascente with Jorg Verhoeven. And the route was wet...
It’s a superb route... It’s one of the best granite multi-pitch routes I have climbed in Europe in these range of difficulties. The line has been kept clean of bolts and that definitely makes it a much more enjoyable experience.

Nico, you came directly from the stage at the Trento FilmFestival to the Mellolocco playground
Yes, it’s impressive to see how professional and highly successful these two climbing events are. I am not the most familiar with these big events but it seems to me that Italy is ahead of Europe in terms of creating big climbing events like this and bringing together big masses of climbers. I was also impressed to see that people are willing to travel long distances to attend these events. It makes me realise that climbing is no longer the marginal activity it once use to be.

What's the worst thing about the Melloblocco?
Adam: The weather, that at first always seems desperate.
Nico: Sometimes there are so many people that it's hard to work a boulder problem. Also there are way too many tick marks - and most of the time they're really big - and holds reenforced with sika. In the future I think the Mellobloco should think of ways to raise awareness about certain environmental issues and better ethics.

And the best?
Adam: The high quality problems. Without these it would never have become such an important event.
Nico: It’s big mix between the beauty of Val di Mello and Val Masino, the motivation of the climbers and the big parties after each climbing. What else could you wish for?