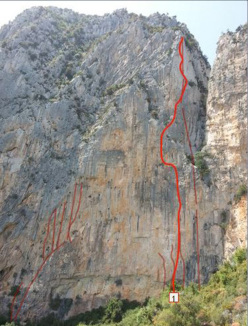 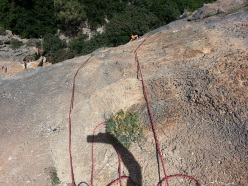 As reported recently, the Baunei area on the East coast of Sardinia has seen some of the most rapid development on this Mediterranean island and one of the newest creations is Megalodon, an 8 pitch line with difficulties up to 7b+ established between 2009 and 2013 by Czech climbers Jan Kare≈° and Slavek Dostal and freed on 19 May by Jan Kare≈° and Lenka Fr√ºhbauerova.

The 220m high route takes a direct line up the centre of a cliff called Dinopark, located opposite the famous Punta Giradili landmark, and aims towards a distinctive tooth-like summit. It was first ascended ground-up, though one stance was repositioned by abseil at a later date. Jan Kare≈° described the climbing as "mostly small crimpy ledges and mono to two-finger pockets. The third pitch requires endurance and climbs the excellent brown rock on small holds and tufas, while the last pitch breaches first class white limestone."

Four years sounds like a long time to establish an 8-pitch route but Megalodon was so long in the making because after the first 5 pitches the team got waylaid, bolting other single pitches nearby to create the Dinopark park crag. With over 25 routes from 3a to 7c+, and now Megalodon, this little gem is certainly worth a visit.

The climbers would like to thank Peter and Anne of the The Lemon House in Lotzorai for their support in developing this and other Baunei crags.