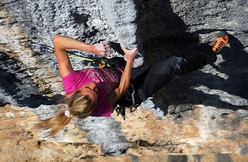 Maja Vidmar from Slovenia has carried out her first ever on-sight of an 8b+, Humildes pa casa 8b+ at Oliana, Spain

Last week the 2007 winner of the Lead World Cup mananged to on-sight her first-ever 8b+, the massive Humildes pa casa at Oliana, Spain. The climb is a significant increase on her 8b on-sight in Kalymnos last year and not only an excellent indication to the effectiveness of her winter training regieme, but also an important reminder as to just how impressive the first 8b+ female on-sight was almost four years to the day. No prizes for guessing who cranked her way up Hidrofobia in Montsant the purest of styles in 2006: yes, the super Basque climber Josune Bereziartu.